Posted on June 20, 2018 by RTS Editor in Society and Culture

Believe me, I wish I were making this stuff up. But it all too often happens to me and many others with disabilities and differences. Truth is stranger than fiction and sometimes more depressing. 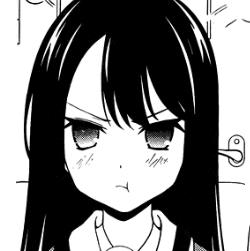 My other half and I went on a short out-of-town trip; we left yesterday and returned today. We took our daughter to visit her stepsister, who teaches elementary school in a town about four hours southeast of us by car. The two sisters enjoy getting together every summer for swimming, rock hunting, marshmallow roasting, and all sorts of big fun.

We stopped for lunch yesterday in Limon, Colorado, population two thousand people—and at least twice as many cows. My little girl and I both had to visit the restroom, so we found our way there while her dad stood in line at Subway to order sandwiches for all of us.

My daughter was doing a serious potty dance. Yes, it’s still a thing for ten-year-olds when the need is urgent. As soon as a stall opened up, my kid pounced on it and slammed the door.

“I was in line,” a woman informed me icily. “Your daughter cut in front of me.”

“I’m sorry …” I stammered, surprised by her frosty tone. “Kids forget their manners sometimes … we’ve been on the road … you’re next. I’ll move my dog over here by the wall out of your way … again, I apologize.”

I backed toward the corner of the restroom, and the annoyed woman flounced toward me. I heard the swish of her skirt and the quick tap of her shoes on the linoleum floor.

BAM! The nearest door swung outward and crashed into my face as the woman entered a stall. I couldn’t say for sure if the woman struck me with the door on purpose or by accident, but she certainly didn’t apologize.

“Wow, you’re one tough chick,” I snapped, shocked and angry, putting a hand to my chin where the door had hit me.

No answer came from the stall where the woman had gone. But my daughter appeared right then, and I didn’t want to make a scene. So I dropped both my hand and the issue quickly.

I went into the stall my daughter had vacated and took a few moments to weigh my options. I had just been assaulted. My daughter could probably identify the woman she had cut in front of, but she hadn’t seen me get hit with the door. I couldn’t prove that had happened, and I didn’t know if any of the other women in the busy restroom had seen it, or whether they would back me up if they had. Besides, there would be Father’s Day bratwurst on the grill for my other half and his son-in-law at our destination in a few hours. Why ruin that because some “bee with an itch” had decided to attack someone who couldn’t see it coming? I wasn’t hurt, and the Limon police probably had better things to do than settle a squabble in a small town sub shop. Even if they didn’t, I did.

I left the stall and asked my little girl as we washed our hands, “Honey, did you cut in the bathroom line?”

Ten-year-old logic. I couldn’t argue with that.

I also can’t argue with this—you don’t hit people in the face with stall doors when their kids cut you in the restroom line. Not just blind people, any people. It ought to go without saying, but apparently it doesn’t. So I’m saying it.

I guess I should be able to shake off the incident and let it drop. Like water off a duck’s back, my dad used to say. I will; I always do. But these sorts of things have been happening with alarming frequency lately. Hate is becoming a way of life in our world, not just for people with disabilities, but for those with different skin colors and for too many people altogether.

The problem is that when micro-aggressions like this add up, they chip away at my sense of belonging, if I let them. They erode my feeling of value, my self-worth, my idea of where and how I fit in the world.

I’m determined not to let narrow-minded strangers define my place in society. People who don’t know and love me don’t get to decide how I feel about myself. But it’s not easy to remember that when they keep trying. I got away this time with a sore spot on my chin, no mark at all. The bruise on my soul may take a little longer to heal.

E. Pinto is a magnet for underdogs! Early in her married life, her home became a hangout for troubled neighborhood kids. This experience lit the flame for her first novel, The Bright Side of Darkness. Pinto’s Spanish-American roots grow deep in the Rocky Mountains, dating back six generations. J. E. Pinto lives with her family in Colorado where she works as a writer and also proofreads textbooks and audio books. One of her favorite pastimes is taking a nature walk with her service dog. Visit her Amazon profile: http://www.amazon.com/author/jepinto.

One thought on “A Stunning Blow”