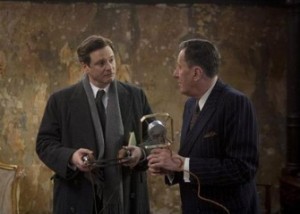 Synopsis: The true story of Britain’s King George VI and his quest to gain control over his voice at a time when his country really needed him.

This film won four Academy Awards, showing the impact it had on viewers. I was among them, watching the film more than once and gaining new insights with each viewing.

Bertie (Colin Firth) was the second son of King George V (Michael Gambon), never supposed to reach the throne, so his lifelong stutter didn’t matter. However, after his father’s death, his elder brother abdicated and suddenly, it was crucial for Bertie, now King George VI, to be able to speak clearly and address the people—especially as England was on the brink of World War II.

His wife, Elizabeth (Helena Bonham Carter), found the unorthodox Australian speech therapist, Lionel Logue (Geoffrey Rush), and got the two together. It was not a harmonious relationship. However, as the new king’s need for clear speech became more important, they worked hard to work together, in the process forging a strong and enduring friendship. The film culminated in the triumph of King George VI giving the most important speech of his life, rallying the people of England and leading the country through war.

I especially liked watching the dynamics of these two key men evolve; the camera work was superb in catching the minutest of facial expressions as they labored over the eccentric exercises Logue formulated to help King George speak. I also liked the scenes of the royal household, capturing the love felt among George and Elizabeth (the beloved Queen Mother of current times) and their two daughters, Elizabeth (current Queen of England) and Anne. At the same time, it was quite clear that Father was The King and positions must be maintained. This film, in my view, will become a classic, and deservedly so.