New Tricks from an Old Cat

Andy has been an unabashed bad boy from the start. He strolled into our yard one hot afternoon three years ago last July like he owned the place, rubbed his scruffy gray body against the bare legs of my innocent little girl, and stole her heart before she ever had a chance to be suspicious.

That was only the beginning of his thievery. Many an unguarded snack has fallen prey to Andy’s stealth and skill. Sam-I-Am, our older cat, quickly learned to finish every crumb of his kibble before he walked away from his dish. If he didn’t, he would certainly be disappointed when he returned. All of us got in the habit of pushing our chairs in if we left the dinner table, even for a moment, to keep Andy from jumping into our seats and mooching off our plates. Andy was a champion counter-surfer, too. One Thanksgiving morning, he snagged a strip of bacon off my stoneware pan in less time than it took me to reach over and turn on the oven. On another memorable day in the kitchen, I stopped him just moments before he thrust his head into a slow cooker full of boiling ham and beans! 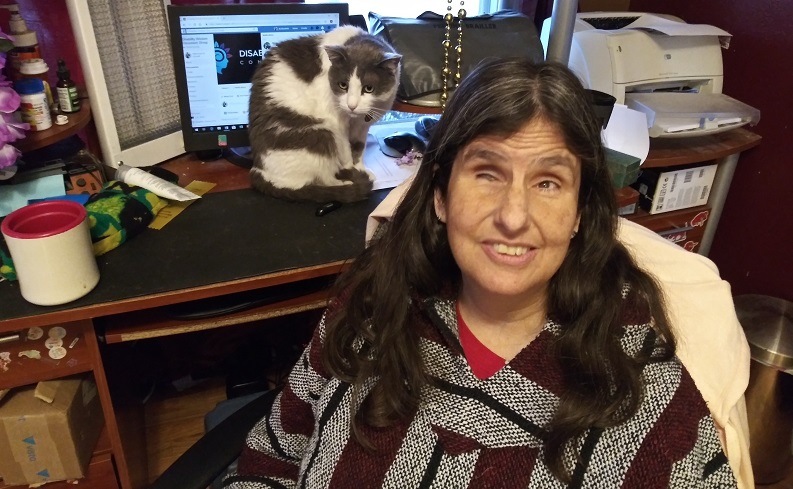 Andy brought life to our quiet household in a big hurry. He kept our other cat, Sam, on his toes. He chased moths, scraps of paper on the floor, and pretty much anything else that moved. He liked to be petted, but only for a few moments. After that, he would bat at our affectionate hands, preferring to treat them as toys.

But last week, Andy stopped eating and playing. He stayed curled up in a motionless ball on the couch most of the time, only getting up to stagger drunkenly to the litter box. He twitched a little when we petted him, but he didn’t open his eyes or make a sound.

Our veterinarian determined that Andy had probably suffered a stroke. He was at least partially blind, and there were muscular or neurological issues on his left side that affected his ability to move and swallow. He might improve; he might not. We could give him some steroids as a boost, then nurse him along; time would tell.

For a few days, Andy stayed almost exclusively in one spot on the couch, except when we coaxed him to eat or drink or when he went to the litter box. He responded to nothing in his environment. We started wondering what kind of life he would have as a permanent limp dishrag.

And then, he arose!

Animals don’t spend their energy wondering why. They don’t worry about what might have been, or what should have been. They live in the moment. Once Andy had rested awhile, he got up off the couch and adapted to his new world.

He has lived with us long enough to know his way around the house. He can locate the litter boxes. He knows where my queen-sized bed is. He has started sleeping nestled securely between my husband and me every night. He has found his water dish, and when he’s hungry, he stands by the washing machine where his food bowl sits. He can’t jump up there by himself anymore, but he waits for one of us to lift him up and put soft food in the bowl. That makes it easy for us to dispense his medicine. He eats very slowly, but so far, he’s still eating.

We don’t know how much longer we have with Andy. Maybe days, maybe weeks, maybe more. We’ll enjoy him while his life is good. Meanwhile, the bad boy has learned to settle down. And we’ve learned a little about accepting tough luck gracefully and persevering because that’s just the natural thing to do.

Jo Elizabeth Pinto was among the first blind students to integrate the public schools in the 1970’s. In 1992, she received a degree in Human Services from the University of Northern Colorado. While teaching students how to use adaptive technology, she earned a second degree in 2004 from the Metropolitan State College of Denver in Nonprofit Management. She freelances as an editor and a braille proofreader. As an author, Pinto entertains her readers while giving them food for thought. In her fiction, nonfiction, and poetry, she draws on personal experience to illustrate that hope is always an action away. Pinto lives in Colorado with her husband, her preteen daughter, and their pets. Visit her website at https://www.brightsideauthor.com.

Related: All About Andy

One thought on “New Tricks from an Old Cat”