Andy sidled up to my ten-year-old in our back yard last Sunday, leaned shamelessly against her legs, and stole her heart before she ever knew what happened. He was scrawny, hungry, road-weary, and in dire need of a bath, but he was mannerly and affectionate nonetheless. 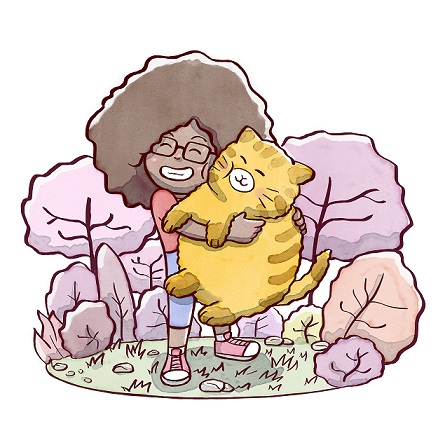 “Mom!” my daughter yelled through the kitchen window, knowing I’d be a soft heart for a hard case just like she was. “Come here! You need to meet somebody!””

I hurried outside, wondering who my little girl was talking to. I hoped someone hadn’t gotten into the yard from the alley. We always keep the gate locked, but my kid has never met a stranger in her life.

“He’s so cute!” My daughter put my hand on the gray and white tabby. He trembled slightly but stood his ground as I lightly petted him.

“Oh honey, not another cat,” I groaned. “We’ve taken in one already, and this one is filthy and shedding.”

“But he’s not a stray.” My little girl showed me the collar and matching body harness. “He’s got tags. There’s a phone number and a microchip ID, and the little round tag says his name is Andy.”

It’s too bad human beings and kitty cats haven’t learned to speak the same language. Unraveling Andy’s far-ranging journey has turned out to be fascinating, albeit a little frustrating. I only wish the tabby cat could talk. The missing details of his epic road trip would make a best-selling book.

“Can we keep him?” my little girl asked eagerly while Andy nuzzled her hand. “See, he likes me.”

“I’m sure somebody’s missing him,” I told her. “He’s been well taken care of, and there’s ID on his collar. We need to find his humans.”

I began with a tag from an animal shelter in Jackson, Wyoming, near the Idaho line. Yes, Andy had been there. His shots were updated. But the man I spoke to, although polite and friendly, couldn’t tell me much more than that. He was actually a deputy sheriff who took phone calls for the animal shelter on weekends. I’d have to try back during the week when the regular shelter staff were on duty, or better yet, find a no-kill sanctuary in my local area and go from there. Most places could read microchips. The deputy said. Andy would have been fitted with one before he left Jackson if he hadn’t arrived with one. All dogs and cats were; which was standard procedure in most U.S. facilities. Take care if you drop him off, though, the deputy warned. Reading chips was one thing, but many shelters in big cities were quick with their death needles. I promised I wouldn’t be dropping Andy off anywhere till I found his home.

Next, I called the phone number on the microchip tag, which also hung from Andy’s collar. I was told Andy’s human had last lived in Berthoud, Colorado. I left the man a voice mail and a Facebook message.

“Berthoud is pretty far north of here,” I murmured, scratching Andy behind the ears as he stretched and purred, obviously used to attention. “You sure get around, cat. What made you pick our privacy fence to shimmy under, hmmm? I guess you knew we’d keep you warm and fed while we find your people.”

It took several days, but Andy’s human eventually got back to me. He was worried about his cat and glad Andy had been safely found. Their reunion will be tricky to pull off, though. Andy’s human had lived in Berthoud, then in Brighton, where the cat landed in my back yard. But he has recently moved to Arkansas for a new job. No easy way to get human and feline together has been worked out yet.

Meanwhile, my little girl has fallen hard for the kitty who picked her to rescue him. She has made him a comfy bed from doll blankets in her room, complete with colorful toys and a sprinkling of catnip. Andy has had a bath, a brushing, and a nail trim, and he and Sam-I-Am, the kitty we took in seven years ago when he was young and needed a home, have after much hissing and posturing forged an uneasy truce. My other half unabashedly holds Andy like a baby several times a day and kisses him on the head. He seems to have a connection with cats that he doesn’t always have with people. As for me, nobody but Almighty God heard me praying out loud that the man in Arkansas will decide it might be easier to get another cat out there and let Andy stay with my little girl… so I’m pleading the Fifth. My lips are sealed.

I know, I know. Letting go is a valuable life lesson. Sometimes you have to say good-bye and move on. And we will, tearfully and gracefully, if and when the time comes. But Andy is the friendliest cat I’ve ever met. He is sliding seamlessly into our family. I can’t help but wonder if it’s meant to be. In any case, whether it’s for the short term or the long haul, Andy chose his rescuers well.

E. Pinto is a magnet for underdogs! Early in her married life, her home became a hangout for troubled neighborhood kids. This experience lit the flame for her first novel, The Bright Side of Darkness. Pinto’s Spanish-American roots grow deep in the Rocky Mountains, dating back six generations. J. E. Pinto lives with her family in Colorado where she works as a writer and also proofreads textbooks and audio books. One of her favorite pastimes is taking a nature walk with her service dog.

To connect with her and learn more see: https://www.facebook.com/authorjepinto/.

3 thoughts on “All About Andy”