If we speak of mental health and film – or Jack Nicholson and/or Louise Fletcher – one film that jumps out to the front is the 1975 One Flew Over the Cuckoo’s Nest by Miloš Forman. Now ranked 33 on 100 Greatest American Films of All Time by the American Film Institute (AFI), the film evokes serious, even grave speculation about the authority and legitimacy of medication- based, biological model of mental treatment that dominated the field of mental health in the west in the 1960s and continues to do so after that period. 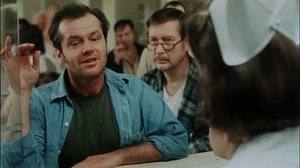 The film tells the story of patients under treatment in a mental hospital in Oregon. Randle McMurphy (Jack Nicholson) enters the hospital as a convict, in a case of sex with a minor, sent for mental evaluation. For observation, they place McMurphy in a ward managed by Nurse Mildred Ratched (Louise Fletcher). The patients, drugged daily, are placed in a regimen that reinforces their acceptance of their “disease” and their status as patients who are supposed to listen and follow whatever is told. But McMurphy’s arrival changes this way of life. Self-assured, ebullient, and pretty much defiant, he sparks in his fellow inmates the need for living life as an adventure. Before long, he starts making the hospital authorities frown.

The film’s context as well as content intimately involves the most fundamental question: what is sanity and who decides it? Patients put on a hardcore routine of drugs and allowed a pretty narrow version of therapeutic talk – where conformity remains the prerequisite – are shown in the film as a failed version of mental treatment since it literally “dehaumnizes” patients, making them objects, or at best prisoners who are apparently alive and being “cared” for, but who have no life, and will be better off without the kind of care they have to take from the institution. The approach to treat the symptom, and that in a manner convenient for the healer, instead of getting to the core of one’s problem stands out as a question of concern for the audience.

One Flew Over the Cuckoo’s Nest is rich in metaphor, notably in its characterization and situations. The patients at the institute symbolize the humanity that has been subdued by authority masked as the healer; Nurse Ratched is the face of authority; and McMurphy’s character represents the free part of humanity – one not yet imprisoned in spirit and calling on the rest of the mankind to reclaim their freedom. The sequence showing the ride on the bus and the boat is very expressive of the much-needed travel to the promised land of freedom and happiness. Near the end, when Billy (Brad Dourif) kills himself following a reckless threat from Ratched, a nurse in panic dirties Ratched’s uniform with his blood – symbolically marking the authority as the murderer. And McMurphy’s rage culminating in the attack on Ratched depicts the revolt of humanity against suppression – of freedom against slavery.

Winning an Academy Award for Best Picture of the year, the film won Academy Awards for Best Actor and Best Actress in lead roles for Nicholson and Fletcher respectively. It is regarded as one of the best films ever made in all respects, and one could agree why.

Decades later, the critique of the mental health system made in the film remains alive in books such as Humanizing Madness: Psychiatry and the Cognitive Neurosciences by Niall McLaren, M.D. The arrival of existential psychiatry did serve as a silver lining and things started to move toward a more humane view of mental health. Still, there is a lot to do as we understand from books like Niall McLarens and indeed we need more films like One Flew Over the Cuckoo’s Nest, though challenging as it would be to touch that level of perfection.