FLOW: For Love of Water

Posted on May 15, 2014 by Ernest in Environment, Movies, Reviews

Irena Salina’s 2008 documentary Flow: For Love of Water takes audiences through the alarmingly dangerous problem of drinking water contamination and the resulting health hazards. The film addresses a number of the fundamental causes of water contamination, including the corrupt/corporate-driven attempts of industry to control the otherwise free and common natural resource of water. 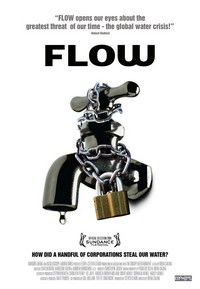 Among others, the leading cause of the drinking water problem is water privatization. Not entirely a common any more, water is bottled and sold to people as a commodity. Interestingly, the very plants that are set up to bottle or filter water remain as a major source of drinking water contamination. Also important to learn or remember is the difference between bottled and tap water: as the film tells, there is little difference. Bottled water and tap water are the same, one just costing more than the other.

With interview clips showing comments of experts in the field of water safety and conservation, FLOW has great educational as well as motivational value. As it informs, bottled water industry is a multi-billion dollar business already and to keep the profit flowing in the direction of dealers, not only is the industry robbing people of this natural resource across the world, but doing so in alliance with the authorities.

Besides health hazards due to the contaminated chemistry of drinking water, water industry’s projects damage the earth and its climate and people in other ways, which is another important side of the water problem addressed in the documentary. Dams, for example, cause a large amount of methane to release into the air, contributing to the global warming problem; and people are displaced as well as natural, fertile land and its ecology damaged by dams.

But what do you do when water is poisoned by industry and the corrupters of this extremely basic, daily need get away with their wrong on account of their influence over law enforcement or judicial system? The film’s motivational side calls for local action for finding the true solution to this crisis. Audiences are told how the core problem is not one of awareness but of political will – there is no change for better if people don’t take action and emphasize only spreading the word.