There are movies for the eyes and there are those for the mind. But some exceptional movies speak directly to the soul. Karen Arthur’s TV movie The Staircase (1998) is one such rare gem.

Written by Christopher Lofton, the The Staircase shows the desperation of a dying nun, Mother Madalyn, in the late 19th century to see the construction of a staircase in a newly built chapel in a small New Mexico town. When a stranger passing by the town commits to building the staircase, the nun believes her prayers have been answered. Will she live to see the staircase and whether the arrival of the stranger is divine intervention are the key elements of interest in this faith-based story.

Barbara Hershey as Mother Madalyn and William Petersen as Joad, the carpenter, deliver impeccable performances as the lead characters with good acting by the supporting cast and believably realistic conflict, both internal and external. The dialogue is excellent and Hershey’s agony and self-doubt run in touching contrast with Petersen’s calm and confidence. The subplot of Mother Madalyn’s past trauma and the bitterness it left in her, now to be washed off by the godly work of the stranger, add to the aesthetic and spiritual merit of the story.

The spiritual worth of the story is also strengthened by the fact that it is based on a true story—that of Loretto Chapel in Santa Fe, New Mexico. 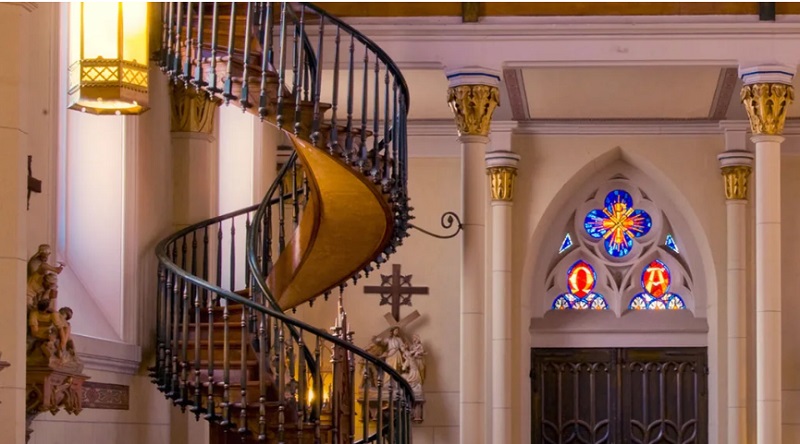 The Miraculous Staircase in the Chapel of Loretto in Santa Fe, NM

As the chapel tells on its website, the Sisters of Loretto prayed a nine day novena (special prayer) to St. Joseph to seek guidance on how to get the staircase built. It was on the final day of their prayer that the mysterious carpenter arrived in the town, carrying only only a hammer and carpenter’s square.

The Staircase is the movie the spiritual healer ordered for the soul.