Magnetic Treatment for Chronic Headaches Taken to the Next Level 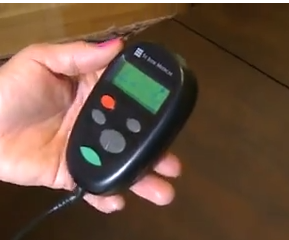 coming these days are making those sci-fi scenes coming to life. The latest in this invention saga is a magnet implant to treat chronic headaches, or migraines.

The new device is a small magnetic device surgically implanted on the skull under the skin and triggered by a button on a control box implanted on the patient’s lower back. The electric pulse thereby generated travels along wires to specific nerves in the brain, calming them down to relieve the pain. The device has been tested on more than 40 subjects who had unrelenting headaches and in some cases it has delivered promising results.

As the CBS news video says, the new device is the first of its kind use on a long-term basis to help relieve debilitating pain associated with chronic migraines. By its design, it is unique in that instead of something to be removed or tied on the affected area, this device is actually inserted in the patient’s body and left there so that anytime the patient feels the need for using it, all they need to do is press a button and get rid of the pain.

Magic? Yes, but the device is still in early stages and reportedly not effective for patients. There is some risk of the electrodes getting out of place and causing infection. Yet, for those millions of migraine sufferers who suffer risks of painkillers and finding little relief, the new magnetic device is a ray of hope.

The use of magnets for treating pain, including headaches, is not totally new at all. Research on developing the magnet-based medical devices for pain management has spanned years. The efforts toward this solution were coming to fruition by as early as 2008 when Arizona-based neurologist Dr. David Dodick of Mayo Clinic developed a handheld device, called transcranial magnetic stimulator, for relieving migraines. The device worked through stimulation of those areas of the brain where electrical activity of neurons increases during a headache episode. Dr. Dodick’s device was welcomed as a non-invasive pain management innovation.

Last year, UK-based paper Daily Mail described a similar magnet-based “new, sci-fi-style treatment” as a possible end to excruciating headaches that plague about 8 millions of Britain’s population. Known as the Spring Transcranial Magnetic Stimulation system, this magnetic therapy gadget was developed by eNeura Technology of California and was prescribed to patients suffering from migraines in various parts of UK.

Magnet-based solutions for pain problem are certainly not confined to headaches. On about.com, Ron Lawrence, MD, describes a variety of medical conditions causing pain and its affected body parts that can benefit from the healing power of magnet therapy. These include arthritis, back pain, and elbow/arm pain caused by repetitive strain injury. Ranging in strength from 450 to 10,000 gauss, the efficacy of medical magnets in relieving pain is proportional to their strength; generally, the more powerful magnet provides better and faster relief.

Besides its easy, and somewhat sophisticated style of use, magnetic pain-relieving devices have the main charm of comparative harmlessness as against painkiller drugs that have each its long and sometimes terrifying list of side/adverse effects.