There are many people who absolutely love the snow. Some of us just love to be in it and others just like to look at it. There is something very special about being out in the snow it’s just one of those things you can’t explain unless you have experienced it. Today we see so much beauty in the snow when it is in its natural relationship to other things such as trees and water, but when we use snow to make something incredible such as a snow man or other fabulous creations the images stay with us for a life time. So it is a delight to introduce Simon Beck, a British cartographer who uses snow to make art.

Michell: Please share with our viewers how you got started with Snow Art? 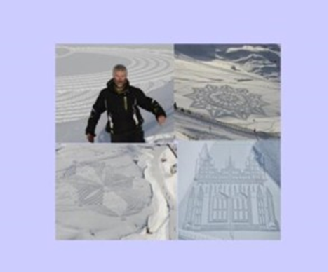 Simon: It was just a bit of fun to do after skiing when I didn’t feel energetic enough to do the hike up to the summit of the Aiguille Rouge (the peak above the resort of Arc2000) that I would usually have done to keep in shape for orienteering competitions. This was a 5 pointed star, and then I added 5 circles to use up the wasted space. After the next snowfall I made a more complicated 10 sided polygon. But it took a while for the snow art thing to get going as I did not have snow shoes at that time, but when I decided to quit orienteering in 2009 I made the snow drawing my main form of exercise during the snow season.

Michell: How do you do the snow art?

Simon: The first stage consists of careful measuring. Start by making the main lines that go through the drawing and measure off waypoints along those lines. Then the secondary lines are added by joining up the waypoints, then other details are drawn in by eye, and finally the shaded areas are added. Often the lines are walked 1 or 2 further times to make them more defined. I use the same compass for map production and snow art and distance measurement is usually by counting paces. Sometimes I use a rope and anchor for making circles.

Michell: How do you choose the spaces that you want to work on your snow art?

Simon: The ideal site would be a snow covered frozen lake with a good viewpoint to the east of the lake and level ground to the west of the lake. Then it would be possible to take photos of the drawing looking towards the setting sun. Most of the drawings have been made at Les Arcs, where there is a choice of about 6 sites, 3 of which are lakes, so the decision is taken according to whether the lakes are safe to walk on, whether the ski lift I need to use to get close to the site is running, whether the site has been tracked by skiers and whether there has been enough snowfall to cover the previous drawing that was made on the site.

Michell: Do you spend a lot of time in the snow doing sports of some kind? If so what is your favorite sport?

Simon: I do some noncompetitive skiing, my sport used to be orienteering, which I stopped doing about 6 years ago. My feet were giving me trouble and orienteering has become too urbanized, possibly in the hope that more young people will want to do it. I also do a lot of hiking when conditions are unsuitable for drawing in the snow.

Michell: When you do the art using your feet how long does it usually stay in place for? Do you need any other special tools besides using your feet?

Simon: It remains in place until covered up by snow (either falling from the sky or windblown snow.) Usually about a week, but in the extreme 2 months, and sometimes earlier drawings can be seen beneath the most recent drawing on the site. At the end of the winter when the snow melts, the first drawing that was made on the site will often reappear. The only tools I use are snowshoes (raquettes) and the measuring equipment as already mentioned.

Michell: What about animals in the wild, have they ever come and worked some of their own art on your creations?

Simon: Occasionally hares and other small animals make tracks. It is more of a problem later in the season when it is getting warmer.

Michell: Do you think this could be a new form of official work out for people who love the snow? I mean snow lovers don’t have to stay inside and do kick boxing now they can join you. Have you considered starting a class or expand a network to do more?

Simon: I shall teach others how to do it when I start feeling too tired to continue. I would like to hire some assistants but it is very hard physical work and I would have to be so choosy about whom I hired I would likely fall foul of anti-discrimination laws, not to mention safety red tape. Really, the answer to your Q is yes, but I am waiting for the right people to come along.

As to its being a work out for athletes, they like to be able to measure their workout, height gained, time taken. This is not possible in snow art as it depends so much on the quality of the snow. It is also lower intensity work than a lot of athletes prefer, yes one could run instead of walk when shading an area but that is the last part of the process and most athletes do not have enough time to do the measuring stage of the process.

Michell: Do you consider yourself to be a humanitarian or an environmentalist? If so why?

Simon: I would say I am an environmentalist, but I have issues with the environment lobby partly because of the unnecessary problems they have caused orienteering over alleged damage the sport causes. Too many environmentalists want everything their own way for example the area I train in close to where my parents live has designated quiet areas where 1000 orienteers who would only want to go there once every 10 years are forbidden so that the small number of people who go there anyway can have it to themselves

Michell: Have you ever considered using this as a means to do fundraisers and benefits?

Simon: Yes, I have done a couple of logos for charities, and some of the money people have paid me for services has been diverted to the St Mary’s Bell fund (www.bellsofstmarys.org).

Michell: Please share with us a bit about your long term goals.

Simon: I would like to be able to earn my living from making snow art, and take it around the world and teach others to do it and make big spectacular works in spectacular places. I would like to start a snow art academy and make it into a more mainstream art form, and get high quality photos in art galleries round the world and eventually have snow art rooms in some of the world’s great art galleries.
It was a pleasure to interview this artist because of the uniqueness of the work.  The next time you see snow, perhaps you will see it in an entirely different dimension.