Posted on September 4, 2013 by Ernest in Reviews, Society and Culture

The popular video provider Netflix, which in the first quarter of the year had 33 million subscribers, is strengthening its 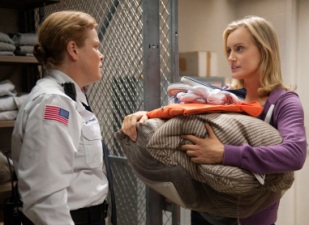 position on the market of content creators with its newest addition, Orange Is the New Black, very well received by critics and audience. The series tells the story of an entrepreneur with a college degree who gets sentenced to 15 months in prison for having been involved in a drug trafficking network in her youth. Behind the show, we find Jenji Kohan, television writer known for Showtime’s series Weeds.

Actress Taylor Schilling plays Piper Chapman who is ready to marry her boyfriend (Jason Biggs), but her life turns upside down when she is sent to prison for a crime committed when she was youth. After college and head over heels in love with the beautiful Alex (Laura Prepon), Piper accepts, in the spirit of adventure, to take one of Alex’s bags to Brussels. And thus she becomes a part of a drug trafficking network. She pleads guilty and gets 15 months in prison. Beautiful, educated, with a varied social life, and about to launch their own business, Piper wakes up among dozens of ordinary inmates.

Orange Is the New Black is nothing like Oz, but an actual attempt to explore what happens to a woman who seems to have it all, when life decides to take everything. In prison, due to her completely different style, Piper is either hated or worshiped and she has some extreme experiences in the picturesque scenery of cells.

The audience is presented with a mixture of relationships: the inmates rule the prison, but don’t imagine that the guards are beneath them. The relations between the two groups have a social contact more varied than you might think initially. The hierarchy between prisoners is constantly changing as well as the relationships between them. Orange Is the New Black is not afraid to explore sexuality, trust, cooperation, and friendship behind bars; but it does it in a more relaxed and fun way, making it stand out between social dramas taking place in the same area. Sometimes the series exaggerates with either comedy or drama, but the result still is very pleasant for the viewers.

Released on July 11, Orange Is the New Black is probably the best received new series of the season, with 80% positive criticism. And we are dealing with one of those series worshiped by critics, but received with indifference by the public, since user ratings are very honorable: 84% of Netflix users appreciate this new series. This is perhaps because the series presents complex female characters, with concerns beyond the frequent make up errors women make – but without avoiding an exploration into the daily nitty-gritty of life.

Interesting is the fact that Orange Is the New Black is based on the autobiography of a woman called Piper Kerman, who shares the same characteristics with Orange’s Piper interpreted with great sensitivity by Taylor Schilling. Probably the experiences presented in the series are embellished for the sake of the audience, but the life experiences of the two Pipers are more similar than we would expect.

Orange Is the New Black has certainly some competition, such as 1600 Penn, Legit, The Following, or The Americans. 2013 has been very generous with us in terms of new exciting series, not to mention the appearance of long-expected new seasons. Which 2013 series you think deserve a place on the top?

Heather Johnson is the president of what you might call a “TV Club”. She gathered an impressive amount of TV series fans and they meet once a week talking about their favorite shows, characters and plots. Somehow like a book club, but holding a remote. Heather also writes about the matters discussed at the meetings and many blogs and journals appreciate her witty comments and objective perspectives on the latest and most popular running TV series.