Posted on September 5, 2013 by Ernest in Reviews 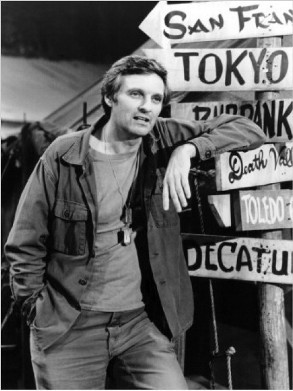 about a medical unit in the Korean War remains the only long-running series with a war zone as its setting. It ran for eleven seasons and the final episode on February 28, 1983 became the most watched television episode in US TV history, with 125 million people tuning in.

M*A*S*H not only recovered the forgotten war in Korea for its audience and provided a stark reminder of the ongoing difficulties for both sides involved in Vietnam at the time, but also revealed how a bunch of people brought together by one of the grimmest of circumstances try to actually get through it together. The struggle to save lives in the operating room only to have those lives sent back into combat went together with the attempts at humanizing the war, embodied in the practical jokes played by Pierce and McIntyre on Frank Burns, the late-night poker, the frolicking in the supply tent or Klinger’s dresses. All their antics, contained in the 256 episodes of the show, are still broadcast in syndication on different television stations and easily accessible via Time Warner Cable.

One of the most obvious and juiciest sources of tension in the first five seasons of the series is the constant bickering between Hawkeye Pierce and Trapper McIntyre, on the one hand, and Frank Burns and Margaret Houlihan on the other. Staunch enemies of the military starchiness embraced wholeheartedly by Burns and Houlihan, Pierce and McIntyre have the upper-hand because they’re top-notch surgeons and Henry Blake, the commanding officer of the unit, always turns a blind eye to their shenanigans (occasionally even joining them, when it comes to donating provisions to an orphanage across the demarcation line or organizing various parties).

Military rank counts for very little amongst the doctors and nurses of the 4077 MASH and any attempt by Majors Burns and Houlihan to establish rigid military procedures is thwarted by the rest of the outfit. Every chance Frank Burns gets to be in command (in the two episodes after Henry Blake’s death and whenever Blake leaves for Seoul or Tokyo), his insistence on knowledge picked up from military handbooks and complete disregard for any actual circumstances bring the unit on the verge of collapse. In one scene from an episode from the second season, he is seen barking out orders to a soldier to paint all the stones in the camp white; when Major Houlihan reminds him that this way they could be more easily spotted by the enemy at night, Burns has a revelation and orders the private to only do the upper half of the stones white and turn them upside down at night. It’s interesting to note that it is in fact the people who couldn’t care less about army protocol and are staunchly anti-war who keep things running and allow the war to continue unabated, while the two military purists who are committed to carrying out orders and regulations ad absurdum are the ones who risk destroying the entire outfit.

Maria Ellis worked for many years as a cinema journalist. She stopped counted the movies or the TV shows she has seen along her career. Now retired and still blogging about it, Maria’s voice and sometimes sharp comments are still available on a great number of online magazines and websites. She just loves the movies and can’t refrain to have an opinion about them.