Last month, I wrote about finding the freedom to return to a part of your dream you had once loved but left behind. But 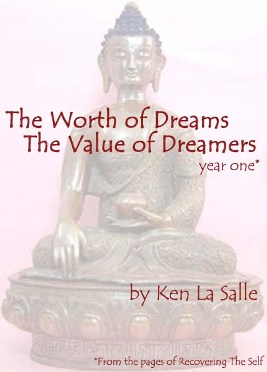 what about having the freedom to engage in those parts of your dreams that you know are well out of your reach?

I know about this very well. As a young man, I was introduced to the works of The Firesign Theatre, probably the smartest, funniest, “theater-of-the-mind” group ever to come out of… anywhere. I would listen to their records, buying them all, and marvel at the potency of their writing, their delivery, and their productions and wish as hard as anyone could that I would one day do something like that.

But I knew that was never to be. For one thing, I had no group of writers; I was (and always seem to remain) a solo act. Further, I knew I couldn’t get the same production values or even the opportunity to record. And let’s not forget I didn’t have a record deal with a studio. So, I chalked that up to just a pipe dream and resigned myself to listening to others and never doing it myself. But years have a funny way of changing everything.

I was sitting on my sofa, recently, wide awake with insomnia in the wee hours of the morning. Sitting there, I returned to that dream and mused on it again, certain that it was out of my reach.

And then a voice said, “You know, you could do this.”

Quickly, I gathered my excuses: no production values, no record deal, no…

“Just do it yourself, then,” the voice said. This voice spoke so clearly that my excuses simply dissolved in its wake. You see, some of the work I have recently been doing as a writer – producing my own audiobooks, for instance – has actually put me in the position to create my own “theater-of-the-mind”. Writing, producing, and distributing anything I created was no longer impossible.

It was the realization that I could do it that actually created the most difficulty, because I could no longer use something outside of myself as my excuse. When it came right down to it, I wasn’t comfortable with the thought of creating something that would be seen as simply never as good as The Firesign Theatre. (This isn’t false humility, either. It’s a case of four against one!)

I had spent most of life happy to use The Firesign Theatre as mere inspirations. As I learned comedy writing from them, along with other sketch greats – like SCTV, Mr. Show, and so on – I have enjoyed some limited success. I wrote a comedy, Murielle’s Big Date that was performed on stages in New York, San Francisco, and Southern California. I didn’t need to prove anything to myself.

But proving something to myself wasn’t what this was about. The desire to do something I had always admired was not rooted in any desire for validation; I just really loved it.

So, when I finally made the decision to create this new thing, which became Radio de-Olde, I acknowledged a few things I knew to be true:

And that last one was really the crux of the matter. Going into any dream with a list of requirements, trying to exert your own ego onto a dream, never works. It is your own ego that stands in the way and, so, it is my own ego that must get out of the way in order for the dream to happen.

It’s scary but there’s nothing quite so joyous. Take it from me.

Radio de’Olde launched in August to a deafening roar of… apathy. It’s going to be a long road. Look for Radio de’Olde on my YouTube channel, and I hope you tackle your greatest dream.

Ken La Salle is an author and playwright out of Anaheim, California. His passion is intense humor, meaningful drama, and finding answers to the questions that define our lives. You can find his books on Amazon and Smashwords and all major etailers. His philosophical memoir, Climbing Maya, is available in ebook and paperback. Ken also has a number of audiobooks available on iTunes, Audible, and all major etailers. You can follow Ken’s writing career on his website at www.kenlasalle.com.