For ages, people and a variety of animals have lived together as members of a single habitat. Part of this ecological kinship is reflected in the biological as well as social traits that exist in similar forms across species. The latest research carried out by scientists at Lund University of Sweden confirms this cross-species relationship.

As reported on Science News, Magazine of the Society for Science and the Public, Lund University’s researchers Elainie 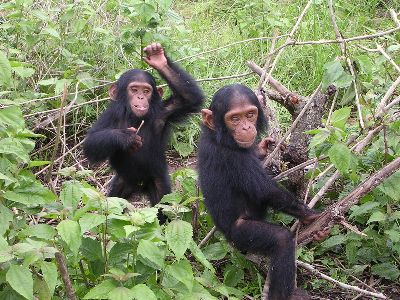 Madsen and his group studied the behavior of young chimpanzees interacting with humans. The researchers found that young chimps closely imitated the facial expressions of the people, the scientists in this case. Of particular interest to the scientists conducting the study was how the chimps imitated the yawns they saw on people’s faces.

The implications of this study, and others like it, go beyond the biological relatedness of species; it points to socially significant emotional expressions that are key to empathy and peaceful co-existence. Previously, such imitation of human gestures has been reported in dogs also, and dogs are commonly known as best friends of people in most cultures.

Such inquiries have of course led to the question whether these contagious expressions across species have a common biological determinant. The answer is “yes”.

Over 15 years ago, scientists discovered the now famous “mirror neurons”, a kind of nerve cells that respond to sensory stimuli generated from other living forms, particularly of one’s own species. This leads to the ability of learning via imitation both verbal and behavioral skills – e.g., language, art, and a range of social skills.

In 2007, an article in Science Daily described the research work of Tübingen University’s Peter Their recorded the response of the mirror neurons of a monkey to actions performed by a human subject in the experiment. The study found close connection between the firing of mirror neurons in the monkey’s brain and the behavior of the human observed by the monkey.

Two years later, Premium Blend published an article “Mirror Neurons in Your Brain and Prick-Eared Dog Breeds”, relating the intelligent and highly social behavior of dogs to the function of mirror neurons.  By then, those studying behavior were already exploring the connection between empathy and mirrors neurons. On a biological level, mirror neurons offered the excellent, and only, basis of imitation of various gestures and behaviors across species.

In 2010, Roman Krznaric credited mirror neurons for the extraordinary gift of empathy in people. In his book The Empathic Civilization, Krznaric even suggested the scientific name Homo empathicus for humans, reflecting their greater capacity of empathy. His work mainly drew on the studies that showed the greater capacity for empathy and sharing of emotions among people who have brains rich in mirror neurons.

The latest research by Elainie Madsen and his group add to the body of evidence suggesting the causal connection between mirror neurons and emotional resonance across species. The research is in line with the 2003 study titled “Emotional empathy as related to mimicry reactions at different levels of information” published by Marianne Sonnby-Borgström, Peter Jönsson, and Owe Svensson of the same university in the Journal of Nonverbal Behavior.