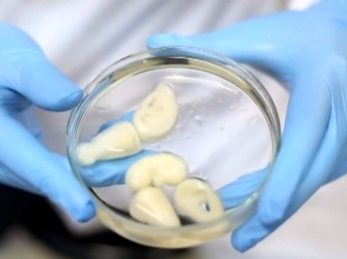 printer is news that has taken science and technology enthusiasts by storm.

Last month 3ders.org reported the invention of the first 3D bio printer at the Hanghou University of Science and Technology in Zhejiang, China. Having 50 kilogram weight, the bio printer is called Regenovo and is capable of printing live mini organs, like a mini ear for example, within an hour.

The miniature kidney printed out in 3D have more than 90% alive cells. The main component in creating the live cells is called hydrogel. Nutrient-rich hydrogel has been used in tissue engineering for well over a decade. A 2002 research paper by Valerie Liu and Sangeeta Bhatia explain the 3D photopatterning of hydrogels carrying live cells.

In the United States too, research conducted on using 3D printing to create life-saving organs is in progress. A recent Fox News story featured the research work on creating 3D-printed organs at the Wake Forest Institute for Regenerative Medicine in Winston-Salem, North Carolina. The story tells the use of tissue regeneration in creating tracheas, skin, and bladders for seriously ill patients. However, as the institute’s director Tony Atala says, the technology is still far from moving to vital organs like heart or kidneys.

With miniature kidneys developed at the Hanghou University, the future of bioprinting of organs seems closer than before. The printed cells stay alive for about 4 months and can be used in organ transplant for patients who suffer from life-threatening diseases causing organ failure. Moreover, the miniature kidneys developed in China are reportedly working just like normal human kidneys, able to break down toxins and remove harmful compounds from the living system. However, the cells in these kidneys, at least at this stage, are said to be significantly rougher in texture than natural kidney cells and it will take some time to create smoother variants of the bioprinted cells.

While it may take several years to develop fully usable synthetic kidneys bioprinted live via 3D printers, the news of success with this kind of research has given rise to new hopes of medical miracles in hands of humans. At the same time, creative ideas for inventions in the medical field are springing in the community of inventors. There already are online design studios helping with ideas for manufacturing a new product in any field.

Timely marketing of medical products is another concern that both patent owners and medical device industry stockholders keep in view with the invention or update of every new technology. MedCity News reports that lawmakers in Europe are now pushing for stricter approval procedures for medical devices, causing medial industry to worry about timely marketing of their medical technology products. It is worth noting that Europe’s medical industry has a business of around 100 billion euros annually.

However, Professor Xu Mingen, whose team developed the 3D-printed  kidney in China, was shown in a news video saying that there is huge market potential for the synthetic living kidneys as millions of patients in China alone await the availability of life-saving organs for transplant but only some of them get the required organs.

Edward Lakatis writes about invention ideas, design, and industry related topics. He regularly contributes to Idea Design Studio, an invention development and marketing company. More of Edward’s writing can be found on http://ideadesignstudio.com/.