4 Easy Tricks to Help You through the Flu 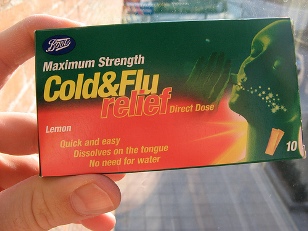 Whether it’s a change in the temperature or there’s just a bug going around, it’s inevitable: At some point every year, the flu will hit you. It doesn’t have to be completely miserable, though! There is a handful of safe and natural things you can do to ease the symptoms. Here are a few in particular:

1. Elevate When You Sleep

No, we don’t mean you should hover over your bed. Think about it: if you sleep flat—no matter which side it’s on—all the mucus in your nose and sinus has nowhere to go (except maybe back into your throat—ick!). It just sits there. If you lay on your back with your head slightly elevated, you’re giving the fluid a chance to drain while you’re sleeping!

2. There is a Right and Wrong Way to Blow Your Nose!

When you can feel your nose running, it’s tempting to just sniffle it back inside. That’s no good, though, because then you’re not actually getting rid of it; you’re merely moving it around. Instead, always opt to blow your nose—gently! If you do it too hard, you could damage something.

The experts recommend that you hold one nostril closed while gently blowing the other, alternating to each side. This helps to clear out each nasal passage a little better than if you were to do both sides simultaneously, like many people do. We know what you’re asking, though: what if you’re completely stuffed up?

3. Hot Showers are Good for More than Just Bathing

Steam helps loosen up mucus; so when you have the flu, it’s a good idea to get someplace steamy—stat! Turn on the shower and crank up the heat; but don’t get in! Close the bathroom door and sit inside while the room fills up with steam. You’ll notice that it’ll become easier to blow your nose, like discussed earlier.

Another alternative to the shower idea is to let your sink fill with hot water and lean your head over it with a towel draped over you and the sink. You can also get a mug of hot water and hold it near your face.

When you have the flu and you’re feeling a little warm, it might be tempting to open the window and let some of that cold winter air in; but don’t! That frigid, dry air will utterly destroy your throat and simply prolong the illness! In addition, exposing yourself to opposing extreme temperatures is bad for you in general. Find a way to gradually cool your body down. Maybe you change into clothes that can breathe a little better, or you turn down the thermostat.

These four things are a great start, but don’t forget the basics: things like religious hand washing, keeping your body covered in cooler temperatures, and never sharing items like drinking cups and lip balm.

Nancy Meyers writes for education blogs where you can read more about the Top 10 Best Online Certified Nursing Assistant Programs.