Canoedling in Cleveland: A Chat with Richard Morris

Posted on August 28, 2016 by Ernest in Author Interviews

Canoes are one of the oldest sources of travel through the rivers. They were originally made by native people and used for survival. Construction of these beautiful creations was made from birch bark and for sure one hundred percent natural—from what was used to keep the pieces together and even down to waterproofing. Most recently my nephew Nathan Spoden got married and I wanted to find a unique gift for him and his new bride. I ended up purchasing a one-hour Tandem canoe ride for two through burning river adventures. So many new creations today are leading us into the future and into the past. One great example is crystal kayak. Our destination leads us to experience, and experience leads us to new directions. Today we are leaning about the stories of Canoedling in Cleveland by Richard Morris.

Michell: Please tell our readers a bit about your background?

Richard: I was born in Pittsburgh and spent my school years in Cleveland—Rocky River before heading to Philadelphia for college—Haverford. 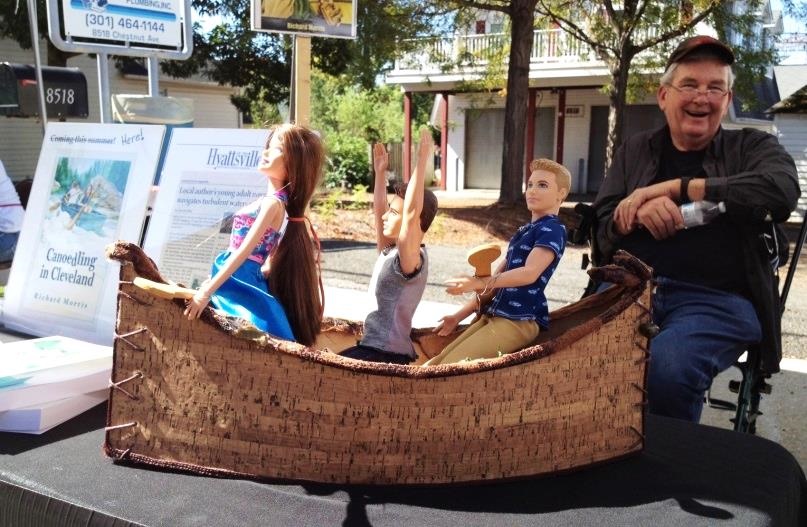 I’ve had several careers. First, I was a soldier—a rifle platoon leader in Vietnam. My first novel, a satire called Cologne No. 10 For Men, grew out of that experience. Reviewers have compared it to Catch-22, M.A.S.H., and The Things They Carried.

After getting an MBA from Harvard, I embarked on my second career—building custom solar homes for thirteen years in Western Maryland. I would tuck this experience into another part of my mind and add to it my third career doing housing research and building codes and standards development for the National Association of Home Builders for twenty years.

My career for the past twelve years has been as a novelist, first finishing the Vietnam novel, which I had drafted in the early 1980s. Next came Well Considered, a thriller exploring racial relations in Maryland in 1907 and 2006. My latest is my young adult novel Canoedling in Cleveland, which is based on my early years in Cleveland.

Michell: What inspired you to write this story?

Richard: I wanted to write a story for young people based on canoeing adventures I had as a youth growing up in Cleveland. I had had great fun canoeing on Rocky River, the Cuyahoga River and Lake Erie, and my characters—Lori, Jeff, and Randy had a blast battling rapids and Lake Erie waves and destroying two canoes.

I also wanted my characters to explore the racial segregation of the city in 1960.  In high school, I was editor of the newspaper, and when it occurred to me that there were no Blacks living in the city, I asked my advisor why, and he said I should ask a real estate salesman. This I did, and the agent told me that he guessed Blacks did not want to live there. My characters, Jeff and Lori, asked the same question, but carried their investigation much farther than I did, and eventually made friends with a black couple, Walter and Sarah, from the other side of Cleveland.

Michell: Is it really you in the story?

Richard: No. Parts of the story are autobiographical, but none of my characters is me.

Michell:  What are some of the most memorable canoeing spots in the book?

Richard: I think young readers will especially enjoy canoeing down a raging river at flood stage, battling rapids in what is now the Cuyahoga Valley National Park, racing an ore boat on the polluted Cuyahoga River in downtown Cleveland, and fighting wind and six-foot waves on Lake Erie during a storm.

Michell: How were you first introduced to canoeing?

Richard: I think I learned how to canoe at a Cub Scouts day camp on a small lake near Cleveland.

Michell: This book could change a community. Do you think that it should be used in public schools as part of their curriculum?

Richard: A judge in the 23rd Annual Writer’s Digest Self-Published Book Awards, who gave it “outstanding” ratings in each of the six categories evaluated, concluded that, “Morris has done a wonderful job, creating a book that deserves a place in every middle school and high school library.” I would certainly love to see it as part of public school curricula and on reading lists in grades six through twelve. I think it would be entertaining for young people as well as give them much to think about and discuss. It would let those who live in racially segregated worlds have the vicarious experience of making friends with people of other races, and it might help break down some barriers that we all live with.

Michell: Do you think this book is a perfect example to reflect on current matters such as “Black Lives Matter”?

Richard: Jeff and Lori do believe that “Black Lives Matter” and want to welcome Walter and Sarah into their lives. The book would certainly help people of all ages reflect on the fear and intolerance that keeps the races separate and leads to the misunderstanding, conflict, and oppression of African Americans by the dominant white class. The misunderstanding of the term “Black Lives Matter” and the need of many in the white community to co-opt it as “All Lives Matter” is an example of today’s continuing separation, fear, and racism.

Michell: Do animals have their rightful place in this story?

Richard: Environmental degradation is one of the major themes of the book. I describe how human polluters destroyed animal life in the Cuyahoga River and its environs, poisoning the river with pollution. The lower section actually caught on fire many times. My dedication at the beginning of the book is to “The heroes who brought back fish, ducks, and eagles to the Cuyahoga River and people to the beaches of Lake Erie, and who created Cuyahoga Valley National Park.”

Michell: Where are some of the best places to learn how to canoe?

Richard:  I think the YMCA and Boy Scouts have good programs for learning canoeing. I went on a 200-mile canoe trip with the YMCA on Lake Temagami in Ontario when I was in high school. There are also excellent videos online.

Michell: What are some of your dreams and goals?

Richard: My near-term goal is to publish my next novel, Masjid Morning. It’s about a young Muslim man, Atif, who falls in love with a Christian girl, Amy, while their families feud over the construction of a mosque. He tries to explain Islam to her, and she, Christianity to him, and both try to save the other. His father, who is a surgeon from Lahore, heads a group that is building a mosque, and her father, a dairy farmer, leads one that is doing whatever it can to stop the construction. I dream that it will bring many people greater understanding and tolerance.

Beyond that, I will have to search inside of me to find another book.

Michell: If you could canoe with anyone in the world who would it be and why?

Richard: I would like to canoe again with my high school canoe buddy whom I lost track of many years ago, or with my friend who helped me destroy an aluminum canoe by wrapping it around a tree on the South Branch of the Potomac River in West Virginia over forty years ago.

Michell Spoden is a survivor of a cold case rape case and author of the book Stricken Yet Crowned. She has an associate’s degree in Business Science Administration and is presently working on her Bachelors in Project Management.

One thought on “Canoedling in Cleveland: A Chat with Richard Morris”