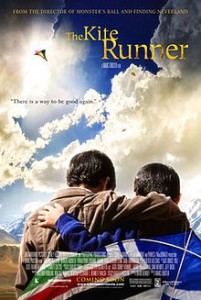 Synopsis: In 2000, Amir, a novelist in California, is called back to Afghanistan by an old friend who offers him the puzzling “way to be good again”.

The film closely resembles the parts of the book The Kite Runner it chooses to portray, and builds heavily, and successfully, on the emotional connections and disconnections within families and between friends. It begins in 1978 with two boys, best friends, Amir and Hassan, servant to Amir’s wealthy father, Baba. They run the streets of Kabul, Afghanistan, fly fighting kites, and listen to Amir read stories to Hassan. Amir is a disappointment to his father, preferring to write over more manly deeds, and finally betraying his friend in an act of jealousy. In 1979, the Russians invade; everything changes; and Baba and Amir flee to America.

Several years later, the father works in a garage. He and Amir also work at a weekend flea market where Amir falls in love with Soraya, daughter of a former Pashtun General who waits to be recalled to his country and duty. As a last act of love for his son, the dying Baba asks the arrogant general for Soraya’s hand in marriage to Amir, which he grants. In 2000, Amir’s first book is published. At almost the same moment, Rahim Khan, Amir’s beloved friend and mentor from childhood, now dying, urges him to come to Pakistan and offers “a way to be good again”.

Amir reluctantly goes, discovers family truths, and is impelled to drive to Kabul, Afghanistan, and rescue Hassan’s son, Sohrab, from an orphanage in the city ravaged by the Taliban. Here, he discovers a courage he didn’t know he had, as he defies the Taliban leader, the childhood bully now grown to terrible power. Amir rescues the abused boy who also rescues him in a similar act of courage. The traumatized boy wants nothing to do with the new life and people in it, but the final scene hints at hope to come.

The Kite Runner has much beauty: kites flying over Kabul and California, the old way of life in bustling Kabul, the majesty of vast plains, and snow-covered peaks. Be advised, it also contains horror: rape of a child, stoning of a woman, devastation by the invaders. As with the book, I’m left with a gnawing in my stomach at the things I’ve read and seen in this country we’ve been engaged with so intimately for the last decade. Yet, I’m glad to find in the film the emphasis at the end on healing, of psyches and relationships, if not of nations.