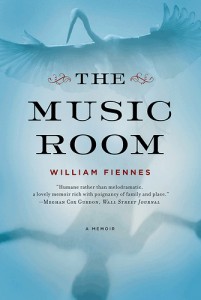 The Music Room: A memoir

Synopsis: William Fiennes grew up in a 700-year-old castle near Oxford, England, in a loving family, overshadowed by an older brother with epilepsy and brain damage.

Richard was 11 years old and already suffering from epilepsy when William was born. Younger brother looked up to and adored older brother, accepting the sudden mood swings, violent outbreaks, and lost memory as just Richard. William didn’t imagine Rich’s behavior as part of a disease. “That would have implied the existence of an ideal healthy Richard… But there wasn’t any other Richard.” He grew older and recognized that he would outgrow childish behavior but Richard was stuck there forever.

Dad and Mum are the true heroes of the story in my view. They did what was necessary to maintain the old castle passed down in the family since the 14th century –tours including a tea shop three times a week, hosting local fairs and celebrations, allowing use of the castle for movie making (William remembers Jane Seymour in Regency costume sniffing roses in their garden), doing the physical chores an ancient building requires, and still exuding love and acceptance to their entire family, and especially the difficult and brain-damaged eldest son.

William Fiennes’ writing is lyrical; you can feel the love he has for his home as he describes his boyhood activities: fishing in the moat, learning to ride a bicycle in the Great Room, trailing his father all over the estate, watching Richard cut down the annual Christmas tree. Much of the book entails research reports and case studies of electricity in the human brain starting from the earliest findings to the present. While interesting, this distracts from the human story and adds a remoteness that distances. Of course, this is an upper-class British family being described and overt emotions are not a large part of their existence. One of the most revealing scenes is this:

One afternoon I saw Dad standing next to the house, his right arm stretched out, palm pressed flat against a buttress, his head dropped. He didn’t move.
“What are you doing?” I asked.
He said he was asking the house for some of its strength.

The Music Room is not healing in the sense that someone gets better, but the depth of love and acceptance of all family members, especially the beleaguered parents, touches the soul of the reader.