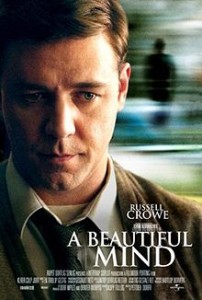 Synopsis: John Forbes Nash Jr. was a brilliant economist, except when schizophrenia derailed his mind. The film illustrates his struggle with the disease and the way he was able to salvage a satisfying life.

In 1947, John Nash (Crowe) was a graduate student in mathematics at Princeton University, mentally brilliant but socially inept and casting about for original research for his thesis. His partying roommate, Charles, becomes his close friend; he finds his project,  and goes on to his doctorate and a career at Wheeler Institute at MIT, with the Department of Defense contracts and secret work along with teaching.

Nash marries a graduate student, Alicia (Connelly), and before long, the schizophrenia which has been there all along surfaces, resulting in hospitalization and the grueling treatments of the time, including insulin shock. These scenes are hard to watch as the nightmare of his disease engulfs him and threatens his family. He endures a painful time of not recognizing his delusions; the medications which control them have side effects disturbing both libido and the ability to think; and, preferring clarity of mind, he stops taking his pills. This leads to another breakdown.

Eventually, he prevails on a former classmate, now department head at Princeton, to let him work in the library and audit classes. He works his way back into teaching and, at the end of the film, wins the respect of his colleagues and the Nobel Prize in Economics for his revolutionary work on Game Theory. He confesses the delusions are still there, but he chooses to ignore them and pursue his work and life.

There are humorous one-liners amidst the confusion and pain of the illness and the cast is superb in all areas. The film won an Academy Award for Best Picture, Ron Howard for Best Director, and Jennifer Connelly for Best Supporting Actress.