I wanted to sit in the aisle seat of the pew. I hoped, as I always did, that I’d be able to get a glimpse of the bride gliding down the center aisle toward her Prince Charming, my gorgeous nephew, Tommy. My husband, Kevin, and I arrived at the church 45 minutes before the ceremony was supposed to begin. The church was empty. We had our pick of pews. We slid into the fifth one on the groom’s side. I was the second one in. Kevin and my folded wheelchair got the aisle seat. Then people started to arrive and Dad slid into our pew. He got the choice seat. I was sandwiched in the middle. My niece and her husband sat on the other side of me. Oh well, I didn’t get to see anything. I don’t think they played the Wedding March either, so basically I was stuck in my own deaf-blind world for the duration of the ceremony, but it wasn’t my doing or anything new. 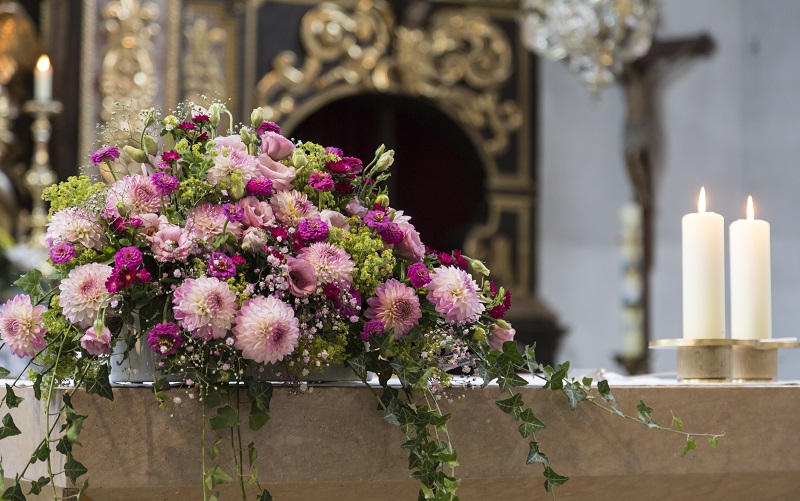 Nobody could accuse me of having a ‘puss’ on my face because I didn’t get what I wanted. I did what everyone else did in church. I stood up and sat down when Kevin did. I knew the bride and groom were married when everyone applauded. Now, it was time to split. We went out the handicapped accessible entrance by the altar while the rest of the family used the other door. Once in the car, we headed to my brother’s house. It wasn’t that close, but ours was even farther away and I had to go to the bathroom.

Just my luck, no one returned to his house as we were told the plans were. I had to use a public restroom in a park around the corner from his house. This was not a fun or easy task for someone in a wheelchair who can’t see where they’re going.

We got to the reception hall an hour before cocktails. The bar was already open for wedding guests. The  bridal party arrived soon after we did. Kevin and I sat on a comfortable sofa, having drinks and eating snacks. Some people came over and kissed me hello. This actually surprised me because most people, especially my family it seems, ignore me at functions. I didn’t know at first in most cases who the person saying hello to me was. Nobody ever says to me, Hi Trish, it’s so and so. They just kiss me. I say a cheery hi in response. After they chatted a moment with Kevin and left, he’d spell the person’s name on my back. I like to take a person’s hand or touch them.

The cocktail hour began. Dad sat at our table. I didn’t realize he was there until Kevin mentioned it, then I said, “Oh, hi Daddy, I didn’t know you were there.” How I wish this statement on my part would embarrass someone one of these days.

I eat very little at weddings. I don’t like eating in front of people. Honestly, I can’t say I’m fit to dine with the queen. I can’t see my food.  I can’t cut it myself. I use too many napkins. And people tend to judge.

Cocktail hour complete, Kevin rolled me into the dining room. This time there’s very little to eat and by this point, I’ve already had a tequila sunrise, 2 glasses of champagne and a glass of white wine, no more drinking for me. It seemed dark in there and again I had no idea who kissed me hello. After the main course, I turned to Kevin and asked if he had to go to the bathroom. He didn’t, but he knew my asking him meant I had to go, well, not badly, but I hoped to split soon. I was exhausted of sitting in my wheely-contraption and tired of being in the dark, so to speak. The music was hip-hop and not my thing. Kevin asked mom, who sat on the other side of me, if she’d take me into the bathroom. She did. There were no problems. On our way back to the table, mom stopped at the bride’s table and spelled my nephews’ name on my arm. I was touched that she did it so well. I gave the handsome groom a hug and kiss. I did the same with the bride next.

Around 11, the wedding cake was served. I was starting to doze off in my wheelchair. I wasn’t bored, just sore from sitting so long. Kevin and I said our good nights to mom. The party continued for another 2 hours. That had to be the longest wedding on record, an all-day event, but it was lovely. I think it was also the first family event that no wars broke out. When one does, I’m usually blamed for it because of my disabilities. I did not get cranky. I did not expect any accommodations. The odd thing was people seemed nicer.

Trish Hubschman has published three books with America Star Books: a short story collection of time travel and romance stories called Through Time and the first two books in the Tracy Gayle/Danny Tide series: The Fire and Unlucky Break. Trish attended college at Long Island University’s Southampton campus, earning a BA degree in English with an emphasis in writing. She lives on Long Island with her husband and two dogs. Her website is:  https://www.dldbooks.com/hubschman/.

One thought on “The Wedding”