Posted on August 4, 2021 by Ernest in Author Interviews 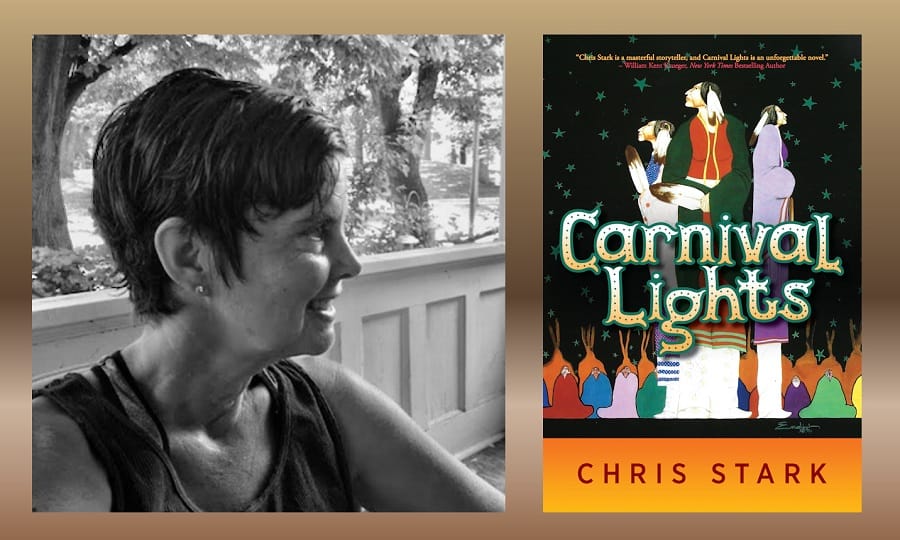 The title sounds like carrying a deeper meaning or metaphor. How does it relate to the theme or plot of the novel?

Carnival Lights is a multi-layered, intergenerational story about an Ojibwe family, with numerous themes.  The title relates to the story in a few ways. “Carnival” is an overarching metaphor for US culture—lots of bling, lots of distractions, and fun-for-sale, but what lies under the bright night lights of a carnival? What is not seen? What is hiding in the shadows? Are there hidden costs to a culture like this? In the construction of this country, some have paid and continue to pay a higher price than others. The bright lights, the myths, the distractions abundant in the US cover up, or rather outshine, the cost many have paid. This book examines those lights, and what is behind them. What does the carnival director not want you to see?

Yet, it’s true there’s plenty of fun at a carnival, and there are positive aspects of US culture as well as negative. There’s happiness, beauty, and joy alongside the garish and frightening. The Minnesota State Fair figures prominently in this book, a place I’ve gone to many times since I was a young girl. I love going to the fair. I enjoy and appreciate the fair at the same time I seek out and attempt to understand, change, and heal the destructive and unfair aspects of US culture. I think this is important for all of us to seek to understand and identify the harmful elements of our culture that are often hiding in plain sight. We need to become more savvy than the either/or thinking that is pervasive in our country and in our political system.

In the book, in contrast to the carnival lights, and the carnival-like atmosphere of urban life, with skies lit up for miles even at night, are the lights from the stars and how stars figure into Ojibwe culture. I won’t say more here, so as to not ruin it for those who are going to read Carnival Lights.

Any particular reason for choosing native American/Indian characters as protagonists?

The two main characters, Ojibwe teenage cousins, emerged twenty years ago in a writing class at University of Central Florida. The professor had us imitate Cormac McCarthy’s All The Pretty Horses. I would not say Carnival Lights is similar to that book, but the exercise was the starting place for this story. Only in Carnival Lights, the heroes are two Ojibwe teenage girls instead of a white boy who can shoot a bullet through a wallet tossed high into the air. I’m Ojibwe, and the time has come for our stories to be told. We’re seeing the beginning of increased understanding and reckoning with the past, which is far more similar to the present than many recognize. Missing and Murdered Indigenous Women and the atrocities of the boarding schools are finally getting attention in the US. It’s time for our voices, past and present, to be heard. I hope Carnival Lights is some small part of that.

Is It a Tragic Story?

In the past, Native people have often been portrayed by white culture to be savage or noble, dead or dying. Carnival Lights is not a tragic Indian story. Carnival Lights is a story of the survival of Ojibwe culture, despite tremendous pressures to die, dissolve, assimilate. It’s a story of love, loss, strength, cultural resiliency, humor, and intergenerational trauma and love. Survival is a dominant theme in this book and these girls are alive because of the strength, beauty, and intelligence of Ojibwe culture, their ancestors, and their families. And the girls meet the many challenges on their adventure to the big city of Minneapolis due to their own ingenuity.

How does this novel compare and contrast with your previous books, particularly any previous fiction books of yours?

Three differences between Carnival Lights and my first novel, Nickels: A Tale of Dissociation (2012 Lambda Literary Finalist) are the scope of the story, the number of characters, and the style. Carnival Lights is a dash of historical fact mixed in with a forward narrative about two Ojibwe teen girls, their family—living and passed–and the white world they navigate through. There are heterosexual, gay, and lesbian characters in the book. Ojibwe, white, and Jewish characters. Good people and not-so-good people. The scope is wide and broad, but takes place entirely in Minnesota from 18XX to 1969, with two epilogues after 1969, including one in 2019. Sometimes the storyline follows a German family haunted by “spirits” in the 1800s. Sometimes it begins in Little Falls and trails back to the Holocaust. Sometimes Finnish culture connects with Ojibwe culture in a good way. The best and worst of human behavior occurs in Carnival Lights.

Nickels’ scope is much tighter. It is narrated from the point-of-view of an Ojibwe girl from the age of four through twenty-five. The story happens through her eyes, heart, and mind up to the first twenty-five years of her life. In Carnival Lights there are two protagonists. Along with those two, there are quite a few characters tromping, dancing, and slashing through the pages of Carnival Lights. Stylistically, Carnival Lights is poetic, yet traditional literature. It’s divided into four parts, East, West, South, and North, which correspond to Ojibwe beliefs about those directions. Nickels’ style is experimental. Nickels is a series of prose poems, with virtually no punctuation.

Check out Carnival Lights at https://www.lhpress.com/store/Carnival-Lights-PB-p333959020.