A while back, I stumbled on a very interesting video that virtually took me into another place. I had never seen this sort of thing before and because I love water so much, I was fascinated with it. It is the art form called Ebru Art and today we have a passionate student and practitioner of the art to tell us about it.

Please welcome Tatiana Kirillova from Russia. Tatiana has been living in Moscow for the last 13 years, while prior to moving to the Russian capital, she lived in the Far East Khabarovsk. 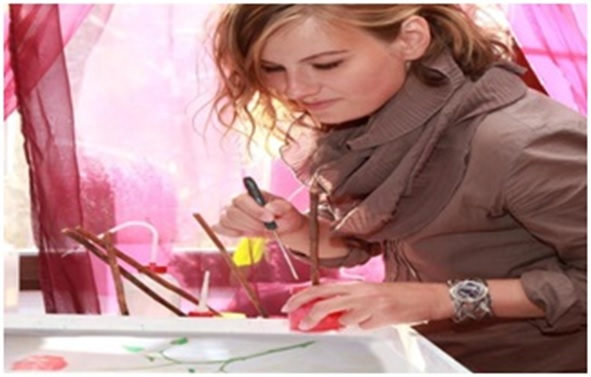 Michell: Tatiana, please describe Ebru Art. What exactly is it and how it is done?

Tatiana: Ebru art is a kind of painting done by liquid paint on a surface of water. Special content of Ebru-paints prevents colors from sinking and makes them spread with geometrically accurate circles on the surface. Colors don’t mix but just squeeze each other until they fill all the area. Since paint should get to the water base in very little amounts (to avoid sinking) the artist uses a special brush to spray the paint by small drops. For creating some traditional floral elements, the artist uses an awl, deepening it first to paint and then slowly to water base, creating circles of certain colors. Then with the same awl, this circle can be transformed into a leaf or flower.

To make colors controllable, we add a special thickener to the water; it actually becomes liquid gel or to be more precise, colloidal solution. But we usually still call it water, because we still use first of all a behavior of water. In Turkey, they usually call this water base kitre.

Michell: How did you get involved with this type of art?

Tatiana: Being a photographer I was searching for beauty everywhere. Once I was charmed by Ottoman tulips in ornaments, saw one picture done by Ebru technique in one magazine and read that it is ancient art kept in secret and only a few masters in Turkey know how to do this. That was in 2007. I couldn’t find more information about them online and started to learn Turkish with a private teacher to learn more about this culture. Then it was a series of mystic coincidences while I took travels to Turkey when I couldn’t get any information about Ebru by efforts to know it distantly; but found it accidentally. For example, once I was in Istanbul for a photo exhibition. By that time, I still knew very little about Ebru and all I had was a simple Ebru set for kids. On the last day of my trip, I felt that I need to go out of a hotel and get lost in the labyrinth of narrow city’s streets, to take a deep breath of the air in Istanbul. But in less than half an hour, I found myself in a very interesting place –a special Ebru shop, the only one in Istanbul! It was unbelievable.

Michell: How long have you been doing the Ebru art now?

Michell: Are there special kinds of paints one has to use when doing Ebru Art?

Tatiana: Traditional Ebru paints consist of 3 components: natural inorganic pigment, water, and ox gall. For thickening the water, they use a type of carrageen; or the one more old and traditional is extract from a plant called “gevan plant” or Tragacanth. Thickeners are modified in form of powder which you stir in the water and wait for about 10-12 hours until the Ebru base is ready. Ebru water-base is in fact a light glue, and as I mentioned before, it is a colloidal solution. Brushes for Ebru are made of horsehair and a rose stem. These materials look very simple, but they are the best for this technique in use.

Michell: Do you think it’s a simple or complex form of art to learn?

Tatiana: This is a very easy art to create pictures. I’d say even a small child can do it but at the same time it is quite complicated to prepare all the ingredients in the right way so that all the “magic’ of Ebru to work.

Michell: When doing Ebru Art, should you typically spend a certain amount of time on it? Or can you break it up into parts and work on it whenever you like?

Tatiana: Ebru is very similar to playing music. Time is very important and you cannot leave your picture undone and finish it later. The image you create exists only in a moment and is changing all the time. It’s important to feel the right time to put a paper on the water and transfer this image. To do Ebru requires a certain state of mind. In Turkish tradition, they believe that a picture is done by the creator and water; artist is only a tool and should have pure heart and humbleness to be a channel between God and water. Image transferred on a paper is like a photo of the painter’s prayer.

Michell: So is Ebru Art practiced more in certain parts of the world than others because of its roots?

Tatiana: We know that Ebru existed in some countries, its spread coming through the Silk Road and it became well-known from China at around the same time of the technology of producing paper. There are reasons to suppose that originally this art was created by shamans in their rituals as they used different plants to boil them and then realized that leather or fabric can hold the images from the surface of this decoction. This is a culture of being connected to nature, being in unity with the environment. This culture is typical for some regions of South Siberia, and North China where the Turkic peoples came from. I think that is why Ebru always was kept in Turkic countries such as Turkmenistan, Tatarstan, Azerbaijan, and Ottoman Empire. That this art moved with the Silk Road even to Italy, I think it always has been Turkish by the essence of the matter.

Michell: If somebody wants to learn Ebru Art, what sort of suggestions would you give them?

Tatiana: It’s best to take lessons from Turkish people wherever they are available because they keep this culture kind of exclusive even if they live outside of Turkey. I think it’s hard to teach another person how to do Ebru. First of all, this person should develop this ability within. For some people, Ebru doesn’t open at all. Probably one should have to have some shaman’s spirit inside – to put it lightly. Some people need a lot of explanation and they should go a long way through logical learning; some people just start doing it, not thinking much “how” and they understand everything intuitively. Turkish masters usually don’t explain how this mechanism works. Sometimes I even think they don’t know it themselves because they don’t question; they just do and feel. As Confucius said, “I listen and I forget; I see and I remember; I do and I understand.” That’s the way it comes.

Michell: Tatiana, thank you for this interesting chat.

Michell Spoden is the author of Stricken Yet Crowned and is also pursuing a transitional housing project for woman with an agricultural aspect. She has a degree in Business Science Administration and is finishing her bachelor’s in Project Management.