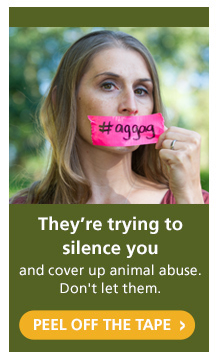 In an email notification dated August 21, 2013, HSUS reminded subscribers that undercover investigations have brought to surface the unbearable cruelty inflicted on farm animals, thus leading to some crucial reforms including the largest meat recall in U.S. history.

However, the agriculture industry is now pushing for legislation to ban undercover investigations and perpetuate animal abuse and cruelty.

“…agribusiness has been pushing anti-whistleblower bills — “ag-gag” bills — to prevent you from finding out about them,” the message from HSUS reads.

HSUS is hosting an online petition on their site titled “Don’t Let Ag-gag Bills Hide Animal Cruelty”. The petition page calls on all to join the HSUS and animal lovers nationwide to protect animals from dangerous “ag-gag” bills that will criminalize whistleblowing on factory farms.

“Make sure we continue to punish those who abuse animals, not those who work to expose it,” says the message from HSUS.