Veterans War with Addiction: Why It Might Be Harder for Veterans to Ask for Help

Posted on October 6, 2020 by RTS Editor in Addiction

When military personnel return home from war or active combat, many only have a few bruises and scrapes to show for it. Some people may consider these veterans the lucky ones. After all, they escaped with their limbs and their lives, while others returned in coffins.

Yet, the toll that military service takes on a person isn’t always visible to the naked eye. Often, the worst wounds are more than skin deep. They cut to the very core of a person’s being and can affect them for the rest of their lives. Thus, mental wounds can be even more damaging than physical ones. 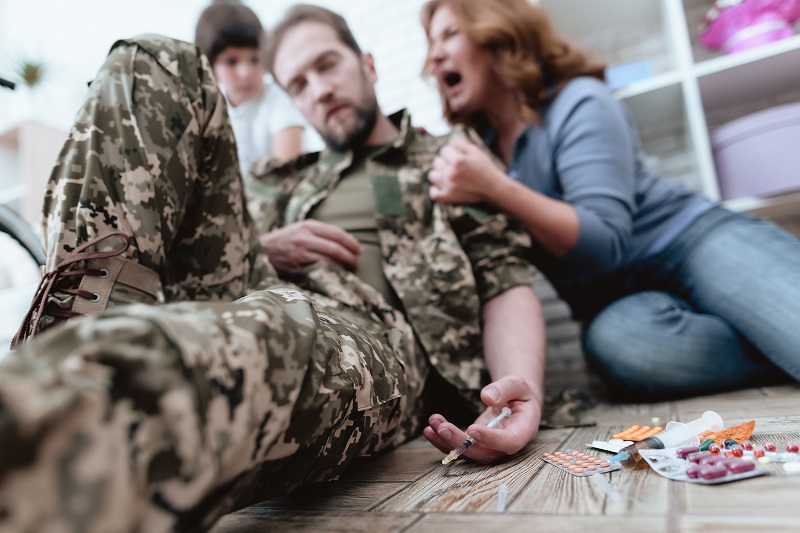 However, many veterans don’t recognize the debilitating effect of these mental battle scars. Until they’re addicted to substances that help numb the pain, they don’t seek help or support, even though treatment and mental health resources are readily available.

Practically every veteran is at risk for developing an addiction. The stresses of deployment and the military’s unique culture alone can be enough to foster an addiction among active-duty personnel. These same addictions will often follow them home and hinder their military-to-civilian transition. Even as rates of illicit drug use among active-duty members decrease, these numbers still increase after retiring from the service.

Poor mental health can also put veterans at risk. Up to 80% of veterans with post-traumatic stress disorder (PTSD) also have substance use disorder (SUD). Likewise, veterans with SUD are three to four times more likely to receive a PTSD or depression diagnosis. In most cases, psychologists can trace these disorders back to military-induced trauma, survivor guilt and horrific wartime experiences.

Post-service civilian life can exacerbate these disorders and put veterans at an even higher risk of developing an addiction. For instance, some may return home with no friends or family to speak of, leaving them lonely and lacking support. Others return to an unstable group of friends who are either suffering with addictions themselves or are unable to provide any kind of emotional or mental support.

Asking for Help Is Hard

Those who don’t ask for help are at a higher risk of developing an even greater dependency on drugs and alcohol. Moreover, without proper support, they may succumb to feelings of guilt, anger and depression, causing many to take their own lives. Yet, most veterans find asking for help difficult — if not impossible — and there are a myriad of reasons why:

Sometimes, a struggling veteran may not realize they’re depressed or have substance use disorder. Other times, they will deny they have a problem. This denial may result from them being unable to gauge their own emotions or recognize their personal addiction. After all, self-evaluation and acceptance are generally more difficult than observing and pointing out others’ shortcomings.

Veterans may also avoid telling anyone they have a problem due to the stigma surrounding addiction and mental health. To many service members, asking for help is humiliating and shameful — an open admission of weakness. This recurring pattern of thought becomes deeply ingrained in the minds of most, if not all, military personnel. Eventually, they come to believe the lie that they must fight their thoughts, fears and addictions alone. Thus, many veterans suffer in silence and isolation.

In war zones and areas of active combat, service members rely on their ability to suck it up and tough it out to stay safe and alert. To admit weakness or succumb to pain means surrendering to your enemies. As these people return to civilian life, they may still use this method of coping with challenges and suffering to deal with their addictions and mental illnesses. Until they reach a breaking point, they believe they should carry their own burdens.

Many veterans also fear the consequences of telling someone about their problems. For instance, some might not disclose that they are ill for fear of losing their children. This is especially true of single veterans who have custody of their kids. After suffering losses during the war, the thought of losing their family — the only thing they have left — can be too much to bear. Thus, they would much rather endure addiction than jeopardize their relationship with their kids.

5. Mustering Up the Courage

Furthermore, some veterans simply don’t know how to ask for help. Trying to find a personal contact can be overwhelming, and, having never looked into mental health or addiction treatment before, the task can seem daunting. Thus, both a lack of resources and too many impersonal ones can discourage them from seeking help. Plus, they must muster up enough courage to take that first step of asking for support, which can be the most difficult hurdle of all.

Be There for a Service Member

Sometimes, all a struggling veteran needs is someone to come alongside them and offer support, accountability and friendship — someone who truly sees them.

Maybe that someone is you. You don’t need to be a veteran to talk to and help a retired service member. The very fact that you haven’t experienced that trauma and aren’t dealing with addiction yourself may prove helpful. By viewing the situation from the outside in, you can more easily recognize their struggle and point them toward help.

Moreover, you can support them as a friend before, during and after treatment. By simply showing empathy and being there for a veteran, you can make a difference in their life and even give them a reason to carry on and keep fighting for a healthy life free of addiction.

One thought on “Veterans War with Addiction: Why It Might Be Harder for Veterans to Ask for Help”