Posted on September 25, 2019 by RTS Editor in Self-Esteem

Don, a younger staff member, worked directly with younger students. Sometimes he would take them outside my classroom door for a pep talk, or to share something personal, such as an appointment coming up for them. He often participated in after-school activities and field trips with the students. This story is in Don’s own words.

I think I started thinking about way back when as a young child, about age four or five. I was very close to my older brother. We lived in a neighborhood where there weren’t many other kids, back in Illinois, so there were just the two of us. My mom and dad at that time were together and we were a pretty close family. My brother was distinctively different from me, he was more adventurous and more the leader. He was a go-getter, ingenious, and consequently he was the one to get in trouble. He paved the way for me to do different things. He was always at the trailhead and leading the way for me to do things. If he survived then I’d try it. If he didn’t get in trouble, then I’d try it.

We were really close at the time, we had matching bikes and matching clothes and we were best friends back then. My dad progressively became less and less interested in the family. He was authoritarian and that caused a lot of problems between him and my brother. They are kind of close in personality, they are both thinkers. I guess my dad didn’t perceive a lot of himself in my older brother. They butted heads quite a bit. 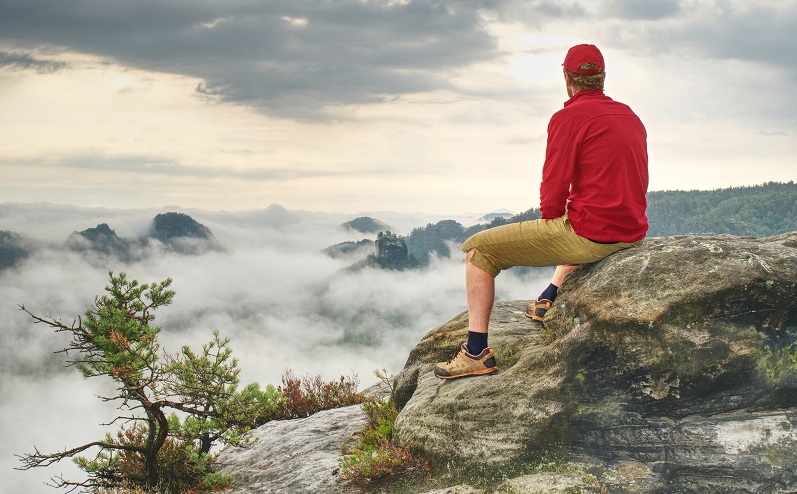 I was sneakier. He [my brother] was more outright and honest. I think that played a big impact in my growing up, looking up to my brother, and kind of watching him to see what to do. He played a significant role in my life. One story that I remember was that my dad had kind of an explosive temper. I had a bad dream one night and I went to his bed, hoping to sleep with my mom and him. He wouldn’t hear of it, he sent me away, I was still scared so I went back, he sent me away again, agitated this time. I went back for a third time. He picked me up and carried me back, and then threw me across the room. I hit the bed and then bounced off and sprained my wrist. We went to the emergency room because it might have been sprained or broken. I gave them the rehearsed line that I had fallen out of bed. My brother spoke up and said no, that I’d gotten thrown. So my brother was looking out for me and he still does. We’re still very close. He lives about two or three miles away from me. He’s a heck of a nice guy. I really admire and respect him.

I think we always feared him [dad] and he would be physical sometimes but it wasn’t an overshadowing problem at the time. It got better in that he just kind of phased out as he got older. He became less and less involved, so we saw less of him. He eventually left. He was just really strict, kind of aloof. Verbally he was explosive on a routine basis. He was quick to anger. He’d be verbally explosive, physically not so much, just occasionally. I don’t talk to him any more, not since he left. It seems like it fits, if he didn’t want to be part of our life enough to stick around or to help me out or my brothers, then he’s kind of forfeited that right to be a part of my life. So I’m not anxious to reconcile and I don’t feel a calling to do so.

When I think about my life, the most important things have been about people. The people who’ve influenced my life, I’ve been fortunate in that respect. I don’t think things have always been great for me, my dad leaving is one of them, and living with my dad is another. But there’ve been great people, my older brother is one of them, and recently my younger brother is one. My mom is a saint, she’s fantastic. I love her. I think that having to discontinue my education at Pepperdine and having to put myself through school and work full time afforded me a lot of opportunities I wouldn’t have had otherwise. I think that Pepperdine would have been nice but I don’t know that it would have prepared me for life after college as well as living life while going to college.

Coming back [from the Pepperdine campus] served its own purpose and I rolled with the punches. I learned to roll with the punches after my dad left. I think those experiences, looking back, have made me see a broader picture that things have a tendency to work out. I’ve learned to be a little less narrow-minded and to look at the broader picture. How can I work this toward my advantage, what are the good aspects that I can pull out of this situation. It’s beneficial for that. It wasn’t pleasant at the time.

When I couldn’t go to Pepperdine for the second year I had to sit down and look at my life. What jobs could I attain. What could I do that would prepare me for a career in psychology which is what I’ve wanted to do since I was eight years old. It’s always fascinated me how people work. I saw that last episode of Mash when I was eight. Hawkeye had to go to the psychiatrist in order to get his confidence back. That fascinated me. That’s always been what I’ve been going towards.

I tried to keep myself busy. I do better if I’m in motion. I kind of worked through it with music. I started taking piano lessons again; I do have a guitar, started teaching Sunday school, and got into rock climbing, actually, which is a great escape. I love rock climbing because it is very physical and yet it’s very mental at the same time. You really have to concentrate, be in the here and now, and whatever problem might be overwhelming before you start up the rock, it dissipates as you concentrate on each individual move and map out each section and each sequence. It’s very therapeutic for me. I go every weekend now. I enjoy getting out of the city, getting away from the problems, concentrating and challenging myself. It’s fantastic. Really exciting.

I’ve always been introverted, so my actions have to speak louder than my words because I’m not saying that much. Even as a young kid, I was trying to keep up with my older brother, and as the middle kid, very quiet, very introverted, I needed to excel to get any kind of recognition because I wasn’t as vociferous as my older brother and wasn’t youngest, like my younger brother. I got in the habit of working hard and trying to excel. This spurred my achievements along too. So even as a young kid I was trying to do tricks on my bike, or get better grades, or not. I liked the attention but I wasn’t willing to go out and talk. I even learned to talk a little bit later. When I needed something he, [my older brother], would translate.

I think the things that we talked about, my friends that I have that have been big influences, spirituality that I’ve looked to and kind of helps me along, seeing the big picture and the opportunities to improve, having a desire to get yourself out of that situation, to be creative in ways to do that, to dig yourself out of the hole that you’ve fallen into, getting through the rough times, trying to fight to explore ways to do that. There are a lot of components there.

I definitely like to keep busy. It makes me feel better to be making accomplishments and moving forward. In feeling better, I can see other possibilities, and feel that I can accomplish these goals, music, school, sports. If I can overcome these obstacles, then I can overcome obstacles in my life. It translates like I can feel good about myself, I have more self-esteem, and I feel like I can assert myself. From these little successes, in life I can succeed. It builds confidence by having successes in these activities. It builds confidence that translates over to other aspects of life. It builds a strong identify of myself and helps me press forward into other areas.

Starting with some action is a good anti-anxiety tool. Even little things, working in the garden, cleaning up your bedroom, all these little actions help you to focus. When you focus, you can get away from whatever is whirling around in your mind. This helps you go forward.

As Don stated, sometimes when we do even the smallest things and complete them, it helps us take the next step and the step after that, in a forward direction. This builds resilience for when larger challenges loom. In his case, Don’s activities and physical challenges were of the utmost use in his personal life and professional development. Don readily talked about his appreciation for his older brother’s influence and the challenges surrounding his parents’ split-up. Don looked deeply inside when, for example, his financial ability to continue college looked doubtful. His re-evaluation and consideration of avenues and miscellaneous options reflect resilience vs. getting lost in anger or anxiety.

2 thoughts on “Don’s Story – The More Challenging, the Better”