Sister-Cousin – You’ll Always Be With Me

Posted on July 27, 2018 by RTS Editor in Relationships

Comedians love to build their acts on their terrible childhoods, so I would have a hard time being a comedian, because mine was almost idyllic. Although I enjoyed the benefits of being an only child, I felt I had been cheated out of three very important ingredients for a perfect young girl’s life, luxurious hair, a respectable bra size, and a sister. I had a best friend in each stage of my childhood, but at the end of the day, they would go home to their families. In college, I chose the smallest dorm on campus, so I could have sisters without the expense and drama of a sorority. 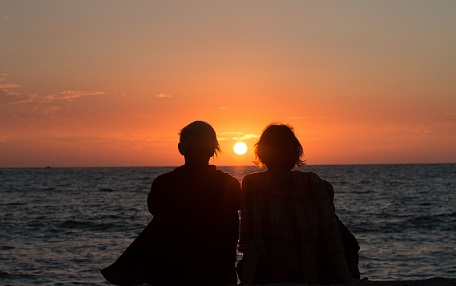 I did, however, have a girl cousin who was about 3 years older than I and whom I idolized. She was old enough to teach me the important lessons of growing up as a girl, like how to apply lipstick, how to do the popular dances, and which words were curse words and shouldn’t be used in public. Carolyn was like a big sister to me. She had a little brother, Johnny, who was more of a pest than anything else when we were kids, and sadly, it would be half a century later at Carolyn’s funeral that I felt close enough to him to feel like he was a brother.

Each year, Carolyn, Johnny, and I spent our summer vacations at our grandmother’s house in the country in southern Indiana, and it was during those times that we bonded as siblings. Carolyn and I, both being older than Johnny, were often mean to him, as kids will be, telling him it had been his turn to run to the mailbox by the side of the road the day before, when actually, he hadn’t had his turn in a week. I have many stories to tell about our adventures at Grandma’s, but for the purpose of today’s musings, I need to tell you about how Carolyn saved my life.

I need to skip ahead, through all the years of high school, marriage, child-rearing, alcoholism, recovery, nursing school, and her experiences as a hospice nurse. Carolyn and I each lived alone, after our respective divorces, she in Cincinnati, and I in Columbus. We both had careers, and were comfortable living alone, but we had agreed that when we retired, we would find a duplex and live side by side, sharing dinners when we felt like cooking, watching chick flicks together, and playing Scrabble from time to time, but we each would have our own space. Once in a while, I traveled to Cincinnati to spend a weekend with her, or she would drive to Columbus to visit me. It was during one of those visits here that her keen observation as a nurse is the reason I am alive today.

We were getting ready to go out to an upscale restaurant for dinner, and we were both scurrying back and forth from bedroom to bathroom in panties and bras, getting dolled up. On one of those trips, we crossed paths in the hallway, and she stopped me by putting her hand on my arm. what’s that dark spot on your arm?” she demanded. I heard the concern in her voice, but I brushed it off as an overprotective big sister’s remark.

“Oh, it’s probably a bruise,” I said. “I’m always bumping into something or other.”

She didn’t argue with me, but she said in a very firm voice, “I want you to make an appointment with a dermatologist on Monday. I mean it.”

The next day, as Carolyn drove back to Cincinnati, she heard a voice in her ear say, “Make sure Mary goes to the doctor.” She wasn’t afraid when she heard that voice. She recognized it as our Great Uncle Herman, whom she had been especially fond of, and whom she considered her guardian angel. She called me as soon as she got home. “Now don’t forget to go to the doctor.” she said again.

When I went to the dermatologist, he extracted the dark spot as if it were a mole, and I thought nothing more about it. I didn’t even call Carolyn to tell her it was just a mole. But the next day, the doctor’s assistant called to tell me I needed to come in right away. That dark spot was melanoma. At that time, I had no idea how deadly it can be. It’s the fastest spreading cancer there is.

It happened that the very next weekend, Carolyn and I were going to visit my mother, who lived near where our grandmother had lived. So I told the assistant I couldn’t make it that week. Could I come the next week? I still was ignorant about how urgent it was to take care of that dark spot.

“No,” she said, with the same firmness in her voice that Carolyn had used. “You need to get in here on Friday. The doctor has moved all his patients so he can see you immediately.” It was probably a good thing I didn’t know the reason for everybody to be so concerned, because it would have scared me to death. As it turned out, Carolyn and I stopped at the dermatologist’s on the way to Mom’s, and they excised the surrounding tissue where the dark spot had been. I had asked Carolyn to stay in the room with me to keep an eye on what they were doing, so she could describe it to me later. But I needed no description when the Novocain began to wear off, and I could feel the knife. Carolyn told me they paused for a minute to run and get more Novocain from the room next door. There would be more testing of the tissue that had been removed, but on we went to Indiana. We agreed not to tell Mom. No need for her to know. I wore a long-sleeved shirt to hide the bandage, and just before we all went to sleep that night, Carolyn tiptoed into my room to check on my pain level. Always the nurse, I thought. Thank God, she is always the nurse.

The melanoma had been stopped in its tracks. Because of Carolyn’s no-nonsense warning without panic or even alarm, and because of my naivete, I was never nervous or afraid. I had every confidence that this was just something I had to deal with and then go on with my life. Whenever I touch the divot in my upper arm, it renews my faith in God. Carolyn thought it was Uncle Herman’s voice she heard urging her to go with her instincts, and maybe it was, but it was the collaboration of God and Carolyn that saved my life.

Now I often hear Carolyn’s voice, but it comes out of my own mouth. We always did have the same timbre in our voices, and sometimes, when we spoke on the phone, it was like talking to myself, our voices were so similar. I’ll say something out loud when I’m alone, and it will sound just like Carolyn. “OK Carolyn,” I’ll say again out loud. “I hear you. You’ll always be with me, and you’ll always be my sister.”

Mary Hiland, a native of Cincinnati, lives in Gahanna, Ohio, with her Seeing Eye® dog, Dora. She is a graduate of the Ohio State University with a B.S. degree in Social Work. She recently retired as Executive Director of The American Council of the Blind of Ohio. Before that, she served for over 21 years as Director of Volunteers for VOICEcorps Reading Service. Ms. Hiland has been published in Chicken Soup for the Parent’s Soul, Redbook magazine, Toastmaster magazine, and The Columbus Dispatch, and is the author of The Bumpy Road to Assisted Living: A Daughter’s Memoir. In 2001, Ms. Hiland carried the Olympic torch, and in 2015, she received the Lifetime Achievement Award from her local Toastmasters Club. Ms. Hiland has two adult children and five granddaughters. For more, visit http://www.dldbooks.com/maryhiland/.

One thought on “Sister-Cousin – You’ll Always Be With Me”