5 of the Most Dangerous Drug and Alcohol Combinations

On its own, alcohol is a potent substance that has the potential to become life-threatening. Despite the dangers, many people become addicted to their’ intoxicating effects. More disturbingly, many people take other drugs along with alcohol to increase or equalize its effects. Combining drugs and alcohol is extremely dangerous, and it significantly increases the chances of overdoses and death.

The following are 5 of the most dangerous drug and alcohol combinations. If you or a loved one is combining these substances, you must seek professional help immediately. 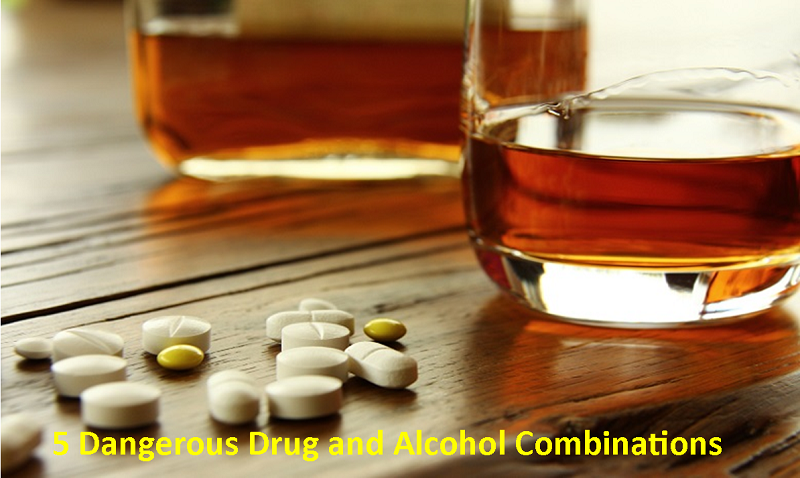 The combination of Xanax and alcohol is one of the most dangerous drug and alcohol combinations. Both drugs are central nervous system depressants, and this combination increases feelings of relaxation and euphoria. Often, people who are taking Xanax will drink alcohol in order to fall asleep. When taken together, it creates greater motor impairment, thinking and decision making. Combining the two also increases the risk of alcohol poisoning, coma and ultimately death.

Cocaine and alcohol is another dangerous combination. People will combine the two thinking the sedative effects of alcohol will blunt the potent stimulant effects of cocaine. The danger with this combination is that cocaine gives users a false sense of sobriety, and will drink more as a result. As a result, users will continue drinking and increase the risk of suffering alcohol poisoning.

This combination also creates a toxic chemical called cocaethylene, which causes significant damage to vital organs, such as the heart and liver. Cocaethylene remains in the body for 12 to 18 hours after formation. As a result, people can die long after these the two drugs are ingested together.

When ecstasy is taken with alcohol, the feelings of love and euphoria produced by ecstasy are amplified and will last over a longer period of time. However, users will experience intense feelings of depression and anxiety once the ecstasy wears off. When these drugs are combined, users will feel the stupor produced by alcohol but not its sedative effects. Users will continue drinking and will eventually experience alcohol poisoning, which can lead to coma and death.

As with Xanax, heroin is a powerful depressant substance. When combined with alcohol, both drugs affect the areas of the brain regulate essential body functions such as breathing and heart rate. Heroin and alcohol create a synergistic effect within the body, so the sedative effects are amplified. As a result, these brain areas can shut down and can shut down the heart resulting in death within just minutes.

People who take antidepressant drugs may drink alcohol in hopes of increasing feelings of well-being. Both drugs act on the hypothalamus which regulates blood pressure, breathing, heart rate and respiration. When the hypothalamus in impaired, it can lead to the body completely shutting down.

Mixing drugs and alcohol is can be a recipe for disaster. Whether you solely drink alcohol or use other drugs, dependence and addiction can ruin your life and the lives of those you love. If you, a family member or a friend are struggling with drug and alcohol abuse seeking professional help can be the difference between life and death. Fortunately, there are many drug treatment facilities available nationwide that feature effective programs that can

Robert Tropp is a functional nutrition practitioner whose primary focus is substance abuse and mental health disorders. Robert used functional medicine to help heal his mind and body, and now uses the lessons he learned in his journey to wellness to help others to regain their mental and physical well-being. Robert is an advocate for the importance of nutrition in addiction recovery and works as the health and wellness director at Nuview Treatment Center in Marina Del Rey, CA.