Posted on September 28, 2017 by Ernest in Happiness 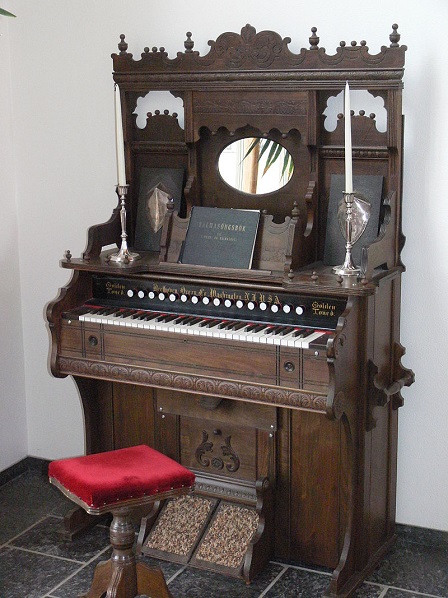 When I was a young girl, I often visited my German Grandmother in our small town of Gatesville, Texas. I always enjoyed her tiny living room because she had an old-fashioned foot pedal, pump organ that made beautiful music. The lovely music filled the room with wonderful, soaring sounds when she played it. I often watched her feet pump air into the organ as she touched its ivory keys.

Sometimes I would attend the German Baptist church in the country with her. It was a white-steepled wooden structure sitting on flat prairie land, between fertile fields of grain and cotton. In the warm, early morning sunlight, as I peeked through the church windows, I could see bright yellow sunflowers growing on the outside. In the blue sky with its fluffy white clouds, little birds soared and an occasional black crow would pass by.

The church held a pump organ and a piano. My self-taught aunt could play either instrument and often did to accompany the all male choir whose melodic harmonies filled the sanctuary with hymns of praise and gratitude to God.

When I became an adult, I also acquired an antique pump organ for my home. I had no formal training in music, but I learned to read notes and could play hymns from my hymnal book in the key of C and also in the key of B flat. I could play well enough to recall my childhood memories.

As I think back on those happy days of childhood, living in a small town in Texas, I feel so fortunate to have experienced those simple pleasures and to have been a part of a family system whose values were sound and basic, whose love of family and God was unshakable. These ideals stayed with me through the years when I left the farm life and small town to live in the big city far away with its hustle and bustle and often a different way of life.

However, all I need to do is sit down at my pump organ, touch a few keys, and the soaring music of the hymns, brings a flood of memories back to me of my happy childhood days and Grandmother’s pump organ.

Perhaps, you can recall an antique pump organ in your youthful memories.