Some years ago, before my father died in Chandler, Arizona, he and I would drive through the desert, looking out at the saguaro cactus and he would tell me, “Those are protected, you know. They’re protected by Arizona state law. Nobody can harm them.” 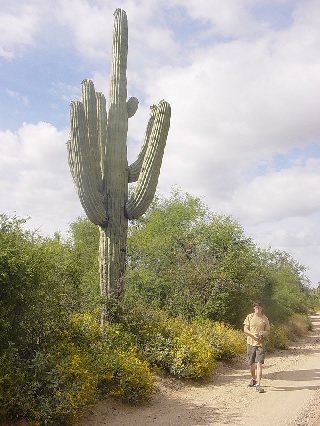 My father was a devout, lifelong Republican. He didn’t believe in global warming. He believed in the free market. And these facts were not lost to me, this weekend, when I opened my eyes to an enormous joke perpetrated by you and me… and totally overlooked by you and me.

Because, you see, no matter how many laws Arizona passes to protect the saguaro cactus, it won’t matter. We’re killing them just as if we hauled each one out with a pick-up and a chain. How are we killing them? With global warming, of course. According to a May 6, 2014 press release from the White House, titled “What Climate Change Means for Arizona and the Southwest,” the Arizona desert faces profound changes as a result of climate change. These things never happen overnight, of course, and so we fail to recognize them. But give it a hundred years or so and the saguaro cactus will probably be gone.

The forests of the western United States will go as well. In this case, it’s because of bark beetles. They are chewing their way across the western coast (and then some) because rampant global warming has changed their climate. They used to be contained by cold winters – but the west coast doesn’t get those quite so much anymore.

It’s a cruel joke, when you think of it. My dad could not have been more wrong. Nothing is protected by local laws – not the deserts, not the forests, and certainly not us – as long as we ignore our impact on the globe. We’re killing the bees. We’re killing the birds. The frogs are on their way out as well. If it’s not because of global warming; it’s because of industrial waste, habitat depletion, carelessness, recklessness – Bottom line: It’s us. We’re reproducing at such an irresponsible rate that we need more and more of the planet, leaving less and less for wildlife, for trees, for cactus, and for our children.

And barring all of that – ignoring everything nightmarish thing we do to our own home – the saguaro cactus is still doomed by the attitude with which we protect them. Saguaro cactus, you see, are classified with a conservation status of “Least Concern.” This means they are an organism about which we hold, you guessed it, the least concern.

Author and Playwright, Ken La Salle grew up in Santa Ana, California and has remained in the surrounding area his entire life. He was raised with strong, blue-collar roots, which have given him a progressive and environmentalist view. As a result, you’ll find many of his stories touching those areas both geographically and philosophically. His plays have been seen in theaters across the country and you can find a growing number of books available online. Find out more about Ken on his website at www.kenlasalle.com.