If you ask people about Helen Keller you get a number of descriptions, “Brilliant,” “Remarkable,” “A legend in her time,” “The first deaf-blind person to be educated, having the ability to communicate with others.”

Which of these is false? Beyond a doubt Ms. Keller was all of these things and more, except the latter. It is possible that she may have carried her language skills to a greater height, but she isn’t the first. 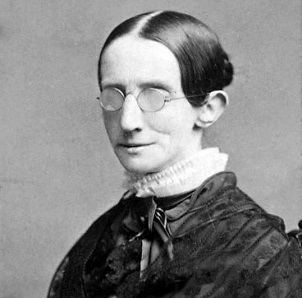 There are indications that deaf-blind individuals were able to communicate through “tactile language” around 1800. There is a record of a girl in France, Victorine Morriseau, 1789-1832, who successfully learned French as a child, although my research didn’t pinpoint an exact time period.

Laura Bridgman, sometimes called the original Helen Keller, was born December 21, 1829 at Hanover, New Hampshire. Her father was a farmer, suggesting that the family may have been of modest circumstances, since farmers of that day were often not on an economic level with professionals or many who worked in various jobs in the towns. She was the third daughter of Daniel and Harmony Bridgman.

When she was two-years-old, the family contracted scarlet fever, a disease unheard of today in the United States, but which was common in the 1800s killing and often leaving children with a disability, especially blindness or a hearing loss. Her two sisters and brothers died, and Laura was left deaf, blind, and unable to smell or taste.

We can only imagine what a blow this was both for Laura and her parents. Given the attitude toward any disability in those days, this triple loss, almost out of the blue must have caused great mental suffering. They must have wondered why such a thing had to happen to them.

Some years ago I read an account describing Laura as hard to manage, sometimes flying into a rage, but my current research says only, “her mother, preoccupied with housework, had already ceased to be able to control her, and her father’s authority was due to fear of superior force, not to reason.”

Someone, probably her mother, taught her to knit and to sew, and years later, she dressed a doll with her handiwork, and sent it to the nine-year-old Helen Keller. As a knitter, I feel that acquiring that skill proves that although her world was lonely and isolated she had a sense of self-discipline, although she occasionally lost control.

It must have been difficult for other children to relate to her, and she found a playmate in a somewhat eccentric bachelor friend of the family, who took her for walks, and communicated with her through a sign language used by the Native American Plains tribes.

In 1837, James Barret of Dartmouth College saw Laura, and mentioned her to the head of the medical department, Dr. Mussey, who wrote a paper on the case. When Dr. Samuel Gridley Howe of the then called Perkins Asylum For The Blind, read the paper, he determined to educate the child. Her parents were willing, and in 1837 she became a pupil at the school.

She was able to imitate others, and apparently was eager to learn, but was limited to the sense of touch. Dr. Howe became acquainted with Julia Brace, a deaf-blind resident at the American School For The Deaf, who communicated using tactile signs, and he developed a plan to teach Laura to read and write. This was uncharted water, since to the best of his knowledge it was something that had never been attempted before.

He and his assistant, Lydia Hall Drew, first taught her raised letters to form words. When this was mastered, they progressed to a manual alphabet expressed through tactile signs. Through hard work and infinite patience, Laura received what is described as a broad education.

I like to think of how thrilled Laura must have been when she reached the point where she could take classes with a teacher sitting beside her to fingerspell what was going on in the class. Laura is described as “a symbol of America’s humanity, and willingness to educate each of its citizens regardless to social class or disability.”

Perkins became an attraction for tourists, mainly because of Laura. One of the famous visitors was Charles Dickens who wrote about her. (note, I was unable to locate Mr. Dickens’ writing.)

Laura lived out her days at the school, and befriended Ann Sullivan, Helen Keller’s famous teacher. Doubtless this association had much to do with Ann’s deep interest in Helen’s plight of darkness and silence.

In thinking about Laura, who, in many ways, lit the path the more famous Helen was to walk, my thoughts always return to that lonely child, unable to express her thoughts, even her very essential needs, who with the help of caring dedicated people met, and conquered the many challenges of her life.

Let’s pause for a moment to remember her, and her courage in leaving home to embark on that new world in a place called school.

Phyllis Staton Campbell, born blind, writes about the world she knows best. She says that she lives the lives of her characters: lives of sorrow and joy; triumph and failure; hope and despair. That she and her characters sometimes see the world in a different way, adds depth to the story. She sees color in the warmth of the sun on her face, the smell of rain, the call of a cardinal, and God, in a rainbow of love and grace.

Though born in Amherst County, Virginia, she has lived most of her life in Staunton, Virginia, where she now lives not far from the home she shared with her husband, Chuck, who waits beyond that door called death. Visit http://www.amazon.com/author/psc-books-all for her books.