Disability is Not a Disadvantage

Posted on December 22, 2012 by Ernest in Disabilities, Inspirational 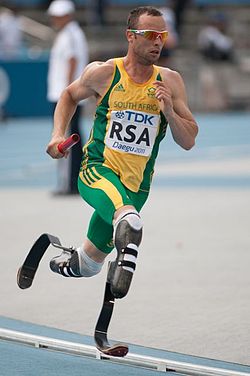 Helen Keller was both deaf and blind. Some people might view these as disabilities. But she didn’t believe them but believed in her own capacity to achieve great things. She has been known as a remarkable author, political activist, and lecturer since. Beethoven was profoundly deaf but this didn’t stop him either from being a worldwide-known musician.

Similarly, Bach was blind but his name extols magnitude for being supremely a classic composer through the ages. All these stories show that being “disabled” is not really a disadvantage. In this article, we will talk about the life of Oscar Pistorius to expound on this thought.

Fastest Sprint Runner with No Legs

Imagine running without legs from knee down. How is that even possible?, you may ask. It’s very interesting to know that that there are such people who exist in the world. The most popular one as of date is Oscar Leonard Carl Pistorius. He is Olympics’ most controversial figure, the world record-holder for 200 and 400 sprint running events. What’s even amazing is that with his prosthetic legs made of carbon fiber attached to his knees, he can run like there’s no tomorrow!

Oscar did not have legs since the day he was born. This disability did not stop him from reaching his dream of becoming good at sports. He has been training since his teenage years and had won many competitions in different track and field championships in South Africa, his home country. Without any negative thoughts about his disadvantage against other runners, he continued to race and improved his running skills enough to take the lead in the Olympics.

To quote Pistorius, “Being disabled doesn’t have to be a disadvantage.” As a double amputee, Oscar has 25 percent less energy compared to the other able-bodied athletes. This was based on a scientific study conducted about the strength his leg muscles can contain. A small team of scientists based in the US concluded that Oscar uses other factors like endurance, oxygen consumption, apart from mechanical movements, to win competitions. Albeit without legs, he still has other body parts that can enable him to have an edge towards every race.

Oscar does not make excuses for failure. Aside from running, he’s also into training water polo, Olympic wrestling, and tennis. Many people are inspired by his determination and regarded him as the Flex-Foot Cheetah and branded him as the Blade Runner.

Parents may be dismayed seeing their newborns with disabilities. But by honing their mentality to think about how they can use their disability and turn it into something positive, magic can take place. People with disabilities should not belittle themselves and should not give up in life anyhow. They must persist to learn that as long as there’s life and air to breathe, there is no stopping them from getting what they have to attain. Nobody is perfect, but everybody can be champions—even those physically challenged, if only the work on improving what they lack.

Before ending this article, take Oscar’s sporting motto: “You’re not disabled by the disabilities you have; you are able by the abilities you have.” Look at the brighter side in life and have a mind of a fighter. Challenge yourself to win the course and the path you wish to choose and succeed.

Mitchell has been involved in the insurance industry since 2004 and is the President of MyLTCPlans.com, subsidiaries of Secura Consultants. Mitchell is responsible for the development and expansion of the online retail disability and long-term care insurance business, building client relationships, disability plan design development and implementation.