When he was young, life was difficult for Bob Mays. He was often bullied by other boys, and at the time, he was too little to compete in sports. Sometimes, he was called names and he didn’t seem to fit in.

When Bob completed college, he married and was grateful to get his job as a copywriter at Montgomery Ward Department Store. Then he was blessed with his little girl, Barbara. But his wife’s illness took all their savings, and now Bob, his child, and wife lived in a small apartment in Chicago. His wife passed away, a few days before Christmas in 1938. 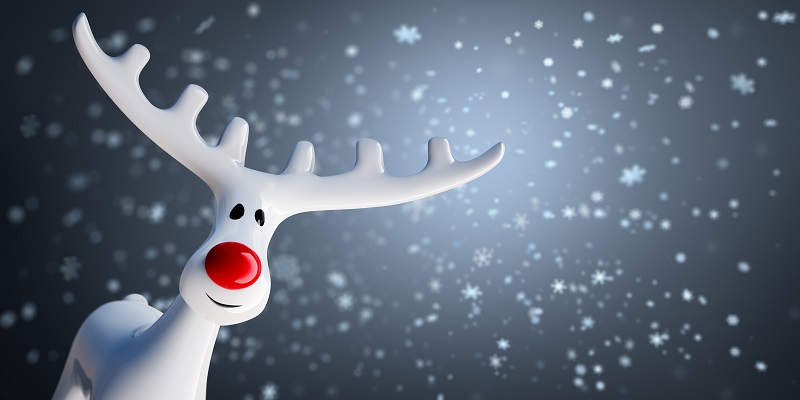 Montgomery Ward had asked Bob to write a “cheery” Christmas book that they could give away at Christmas to shoppers, and asked that an animal be the star of the book. Due to the loss of her mother, Bob struggled to give hope to his child. He decided to make a storybook, as suggested, with a deer character, especially since Barbara loved the deer in the Chicago zoo.

Bob drew on his memories of his childhood struggles, and not “fitting in” with the other children as he wrote the book. The character was a little reindeer named Rudolph, with a big shiny nose Bob finished the book just in time to give it to his little girl on Christmas Day.

The Rudolph Poem Booklet was distributed by Montgomery Ward during the 1939 holiday season. Montgomery Ward offered Bob May a small fee to purchase the rights to print the book, and Wards went on to print, “Rudolph,  the Red- nosed Reindeer” and distribute it to children visiting Santa Claus in their stores. By 1946 Wards had printed and distributed more than six million copies of Rudolph.

In a gesture of kindness, the president of Wards returned all rights back to Bob May. The book became a bestseller. Many toy and marketing deals followed, and Bob May became wealthy from the story he created to comfort his grieving daughter.

Bob’s brother-in-law, Johnny Marks, made a song adaptation to Rudolph. It was recorded by the singing cowboy, Gene Autry. “Rudolph, the Red-Nosed Reindeer” was released in 1949 and became a great success selling more records than any other Christmas song, with the exception of “White Christmas.”

The gift of love that Bob May created for his daughter so long ago kept on returning back to bless him again and again. And Bob May learned the lesson, just like his dear friend Rudolph, that being different isn’t so bad. In fact, being different can be a blessing.