Why Veterans Turn to Drugs and Alcohol

Posted on June 27, 2019 by RTS Editor in Addiction, Veterans

A barrage of clinical studies over the last decade have consistently shown that US soldiers exposed to active combat in Iraq and Afghanistan are far more likely to engage in heavy drinking. This heavy drinking is classified as both heavy on-set alcoholism and extremely unhealthy levels of binge drinking. Most of the studies concluded that the easy availability of alcohol and the severe stress of coping with combat are the primary drivers behind the upsurge in alcohol abuse amongst US combat veterans.

Prescription drug addiction, as well as illicit drug abuse, are also much higher amongst active US military personnel than rates of abuse within the American civilian population. One theory behind this is that active military service members have a substantially higher rate of injury than civilians, with many of these injuries being severe enough to warrant addictive prescription medications that contain opioids. When the prescriptions run out, and the addicted service members are no longer able to get a doctor to fill a new prescription, they frequently turn to illicit black-market drugs such as crack, cocaine, and heroin. 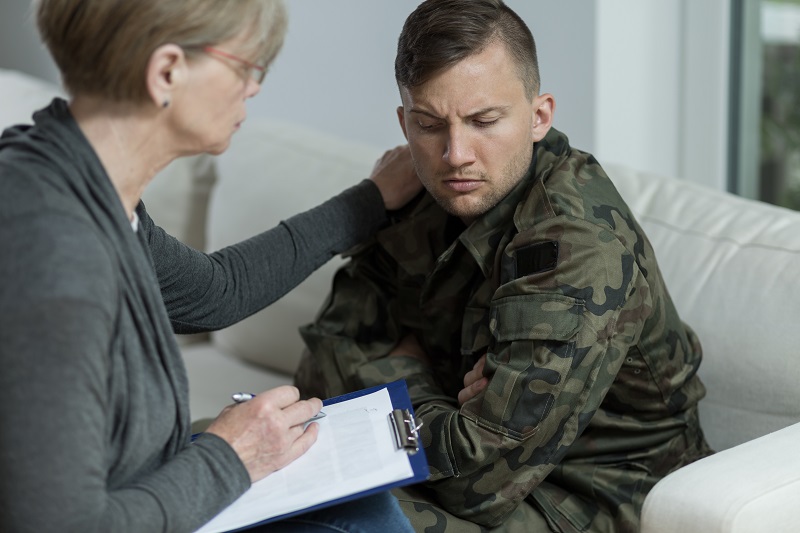 Tobacco addiction, alcohol abuse, and illicit drug addiction are all substantially higher in active military members than what you would find in the civilian population. The primary driver behind this is that soldiers deal with unfathomable levels of daily stress, anxiety, and depression. The horrors of active duty are frequently bad enough that they cause permanent lifelong psychological scarring. This often leads individuals to seek out a coping method to self-medicate away their psychological agony. There is a bit of a stigma within the military to discuss personal addiction issues openly, so for that reason, the problems of abuse often stay hidden and buried within the personal lives of the soldiers.

US military veterans also suffer from a high rate of alcohol and illicit drug addiction. Tobacco addiction is also quite high among former soldiers. It should be noted, however, that these rates are lower than abuse and addiction rates amongst active military personnel, but still much higher than rates within the civilian population. While former soldiers suffer from the same stress as active military personnel due to the psychological scarring they have received from battle, there is also another primary driver behind the need to self-medicate with drugs and alcohol. US military vets are often faced with severe economic hardships once they leave the military. This could be because they only received a high school education and possess few attractive career-oriented skills, or it could be due to their inability to hold down a steady job due to ongoing emotional and psychological problems caused by active duty.

Another massive problem amongst US military vets is PTSD, an acronym for post-traumatic stress disorder. This is a condition that is caused by exposing a person to a severely traumatizing event that they will actively relive and struggle to cope with in their memory. Shockingly, it is estimated that nearly 20 percent of all military service members that served in Iraq and Afghanistan suffer from some form of PTSD. The link between PTSD and alcoholism or drug addiction is extremely high as people suffering from the condition will feel desperate to capture a sense of relief from the mental agony caused by it. Some studies have concluded that 60-80 percent of people suffering from PTSD also suffer from alcohol or drug addiction.

Occasionally the DoD, also known as the Department of Defense, will publish certifiable substance abuse rates amongst all US military personnel, including vets. The most recent batch of statistics published shows a shocking reality that has horrified the general public and clinical practitioners alike. In the list below, we have listed the 6 most horrifying addiction-related statistics published by the Department of Defense.

1. Between 2004 and 2006, nearly 8 percent of all US military vets suffered from some form of substance abuse. This includes alcohol, prescription drug addiction, and illicit drug addiction. These statistics were gathered by the SAMHSA, also known as the Substance Abuse and Mental Health Services Administration.

2. 20 percent of US military vets that suffer from PTSD go on to develop severe alcohol or drug addiction. What researchers have found is that people who suffer from PTSD have lower impulse control, which in turn leads to a much higher rate of addiction. These stats were also published by the SAMHSA.

3. Nearly 20 percent of military vets that served in Iraq and Afghanistan suffer from PTSD. It was the publishing of this statistic alone that launched a nationwide awareness campaign across the United States to alert the general public about the terrible mental condition.

4. Over 20 percent of female military vets that served in Iraq and Afghanistan suffer from PTSD. This statistic was gathered by the US Department of Veteran Affairs. The link between PTSD and substance abuse amongst females seems to be quite a bit lower than its prevalence rate amongst men.

5. 25 percent of vets that served in Iraq and Afghanistan suffer from some form of mental health problem. This is according to data published by the US Department of Health and Human Services. Up to 60 percent of these vets suffer from some form of substance abuse issue. The rate of prescription drug addiction among these individuals is the highest.

Vets Can Struggle After They Return to Civilian Life

Many US military personnel that served in Iraq and Afghanistan served multiple tours of duty. This means that these soldiers were exposed to active combat, in some cases, for many years straight. Once the human brain adjusts to coping to the severe amount of stress caused by warfare, it is challenging for the brain to revert back to a civilian modality of functioning. The high rate of stress essentially redlines your brain, causing it to rewire itself to survive the extreme demands of warfare. Getting it back to a standard civilian rate of the functioning can takes years or intense therapy.

When military vets are asked why they turn to substance abuse during a return to civilian life, they usually give one of eight different answers. Some claim they use drugs and alcohol to combat the aches and pains associated with psychological and physical injuries sustained during the war. Others struggle with the civilian criticism of the war when they return home. Some of have changed family and personal lives. Many soldiers struggle to reconnect with their family and friends. A large number of vets miss duty and their soldier comrades. Some vets struggle with mundane and boring civilian jobs. Others feel alienated within society. And lastly, many vets suffer from PTSD, depression, anxiety, and other mental health problems.

There are many telltale signs of drug and alcohol abuse specific to soldiers. Identifying them can be very important to assist the vet or solider with making a recovery from the addiction. Some of the symptoms of drug and alcohol abuse include mood swings, strange behavioral responses, extreme weight loss, reduced attention towards personal hygiene, lethargy, facial sores, red or watery eyes, social withdrawal, being overly secretive, and financial recklessness. If you noticed a veteran friend or family member exhibiting these symptoms, then you might try gently bringing up the subject along with encouraging them to seek out some professional help.

Christopher Barnes has worked in health care for over thirty years. He is a graduate of Alabama State University where he earned a double Bachelor of Science Degree in Social Work and Psychology in 1982. Christopher Barnes is currently the Director of Clinical services at The Discovery House where he has been employed for the past five years. Because of his extensive experience in health care & substance abuse he has an excellent rapport with constituents, clients, and other professional organizations in the counselling/social service community.