Until You Learn It

Posted on September 2, 2014 by Ernest in Abuse Recovery, Parenting

Once upon a time, in a galaxy far, far away, there was this sweet angel with big brown eyes and a blond curl down his back. When he smiled, those dimples just danced. His eyes just lit up. Then one day, when we weren’t looking, the aliens came and replaced that sweet little boy with a monster! 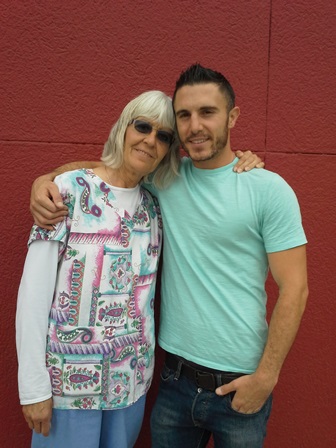 I won’t go into the details of the next 8 long, dreadful years. We have all been there in one way or another. My story is how this monster and I finally returned to the living.

After many years of trying different therapies and tough love, we were at our wits end. I finally sent him to a Behavior Modification Program located in another country. Why us? What did we do wrong? The guilt and shame of having your child sent away because we couldn’t help him. But we all learned a lot about ourselves with this program. They not only worked with the child but with the whole family. Ways to do things differently.

It wasn’t easy bringing my son to a rehab in a different country knowing he would be there for a long time. The fear that he would hate me forever was always there. We were unable to communicate with him directly but were able to talk with his councilor weekly. After attending the first parent seminar, lasting 4 days/ 15 hours per day, of an intense soul searching, gut wrenching and a lot of crying going on. Many things came to light for me. I wasn’t the bad parent; I did what I could at the time and learned that some of my behaviors were not the best choices.

After the first seminar we were able to attend what was called a Parent/Child seminar. We got to see Matt for the first time in 4 months. He had changed a lot, but he wasn’t doing drugs either. We had some good communication and got rid of some baggage. It was hard to return home.

There were 2 optional seminars that we attended; these were more intense than the first. After these seminars I was able to be a volunteer parent in these seminars and help new parents to the program. I have to say, seeing these parents struggle the way I had at the beginning, made me realize how far I had come in my own program, to stop blaming myself, for I did not make him start taking or continue doing drugs, it was his choice.

Although it was hard having him there, the stress of knowing the next phone call would not be from the police, or hospital or worse the morgue was actually a relief.

Let me introduce you to my son, Matt. He was in the Behavior Modification Program at the time and 17 years old.

“Like many other kids, my stay here started off pretty dramatic. For the first three weeks or so I was a non-functioning kid within my Family. Like many others, I had been smoking marijuana every day before I got here and I hated authority, so in a perfect sense this was the right place for me. I started doing a whole lot better after I went through Discovery (first stage), but that was only the beginning.

I did not complete my first Focus (second stage), but I went through the next one with flying colors. I would have to say the Focus was my best seminar. I got to Level 3 my first time. I was voted up with 100% support from the student council. I was doing great.

I went to PC1 (parent/child) and got a lot of things off my chest to my parents, but I still held something back, which I will explain in a little bit. I didn’t complete Accountability the first time but, I did the second time. I had complete support from my family for Level 4, and was about to be voted up, when an issue I hadn’t dealt with, came back to bite me. Ouch!

I still was not dealing with my drug issue and I got caught with a journal with a bunch of stuff about drugs and many other things. I received my first category four in my program. I fell flat on my face for about a week and then realized that I could do it if I put my mind to it, so that’s what I did. I pushed real hard and got all thousand points back in four weeks and I was voted up again and got level III. I learned a lot about how I was still holding onto the past and how that was bringing me down. Everybody thought I had learned my lesson from this. I even had myself fooled. But I really hadn’t learned. A week after my first category four I got another journal and started writing explicit stuff in it again. This time I thought I would not get caught! As the saying goes, “The universe will provide the same lesson into you learn”. That’s exactly what happened. I got caught and got another category 4, I thought it was over; I only have about seven months until I turned 18 so I said, “Why even try?” But after talking with some really good friends, my parents, and my family counselor, I decided I needed to change something. I realized that if I wasn’t even doing drugs and it was affecting me here that I needed to deal with this issue. So I took it on. I have started working the 12 steps and I have signed up the Chemical Dependency classes.

Everything is going great now. I’m on the third step NA about to take my fourth step and I am taking advantage of all the opportunities that this places giving me. Through my chemical dependency classes I have learned I used drugs to 20 although verbal abuse in my house and hide my feelings from my parents and my sister; and I’ve talked to my parents about that. My parents have changed so much its unbelievable; and no, they are not “Program Parents” as some kids like to say. They are loving, caring, beautiful people who have made mistakes in the past and are now learning from them. They also have taken advantage of the program. I can’t say I like being here too much, to be honest with you, but I do thank God I came here. Because if I had not I would just be another “has been”, “washed out stoner” who did nothing except play guitar and smoke pot all day. Now I am a caring, loving, talented young man loves music, paintball and actually has a direction in life. I am also the head of my class in school and will most likely graduate before my class. This place has helped me mature and grow so much I can’t even believe it but before I go I just want to say, “Thank you!”

Matt continues to grow and mature. After bouncing around for a little while he joined the US Army, returned to church and continued going to meetings. He is now in school to become a nurse. He continues to work his program as do I. We both sponsor others and attend meetings.

So if you are a young person, addicted and lonely, you don’t have to be. All you have to do is believe, “Let go and Let God”. The rest will happen and you don’t have to do this alone. Sobriety is awesome! And there is so much more out there. Make sure you have an awesome support system with people you trust and who love you.

So when they say The Promises do happen, believe it. For us it was Letting Go and Let God. We truly believe there is a Higher Power guiding us. And I give thanks on a daily basis that my son’s Higher Power kept him safe and gave him a jolt.

Now his eyes sparkle, the dimples dance and he has turned into quite a man!

The aliens returned my son!

Elaine is a Registered Nurse of 35 years with 2 adult children, one being a recovering meth addict. She also is in recovery and loving every new day. Elaine also has a certificate in Addiction Counseling, and has recently been freelance writing which keeps her on track with her program. When not working or helping others in and out of the program you will find her volunteering at an Alpaca ranch, or camping in the mountains with her dog.