Scientists in California have made news worldwide by announcing a new invention that can possibly revolutionize the world of electronics, especially of nanotechnology. The invention in question is the first computer based on carbon-nanotubes. 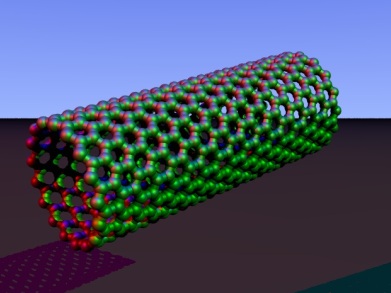 As reported by World Science, the article describing the carbon-nanotube computer was published in the September 25th issue of the popular science journal Nature. The project that led to the creation of the new computer was headed by Stanford University (California) scientists Subhasish Mitra and H.S. Philip Wong.

Technically, the significance of carbon-nanotube computer lies in its potential replacement of the silicon –based computers. Silicon transistors in computers have been used for decades to make computers run as efficiently as possible against their higher power-wasting capacity. Carbon nanotubes make a much more energy-efficient form of transistors and hence make the computer durable and more efficient. Due to their much narrower volume, these nanotubes are physically more effective in controlling the amount of electric current passing thorough them.

Beyond their technical side, the practical implication of carbon nanotubes for people has been a topic of great interest, especially in health science. For years, researchers in the field of medical technology have worked on the role of carbon nanotubes in detecting cancer. In 2011, engineers from different but related research areas teamed up to create a device made of carbon nanotubes that could detect cancer cells as well as the AIDS/HIV virus. The news of this invention caused excitement as it kindled hopes for inexpensive cancer and AIDS testing, particularly to be used in developing countries where most of the people cannot afford healthcare costs.

While the enthusiasm surrounding the potentially revolutionary carbon nanotube technology continued among researchers, a new study conducted earlier this year by the National Institute for Occupational Safety and Health warned against the use of carbon nanotube technology for testing and diagnosis. The call for caution came after the institute’s research indicated that some carbon nanotubes may increase the risk of cancer if the subject is being exposed to some carcinogenic agent at the same time. While the research findings did not suggest that carbon nanotubes alone could raise the risk of cancerous tumors in subjects, the red flag associated with these nanotubes did wave at the attention of health-conscious groups.

The use of carbon nanotubes extends beyond health and major computer systems. These small technological units are also becoming a part of a number of accessories. For example, most recently, they have been incorporated in headphones that produce the thermoacoustic effect – creating sound from change in the volume of air.

Yet another use of carbon nanotunes is seen in improving designs of individual accessory items of electronic devices, e.g., lithium batteries. And of course, carbon nanotubes have been tried in the all so trendy solar panels for making energy-efficient homes and workplaces since these tiny items have a great potential for efficiently harvesting solar energy.

In a world of technological flux, innovation can’t be separated from the use of advanced computer technology. Coming up with a new product is mainly based on smart invention design. Big leaps in nanotechnology have come from better invention designs, which are constantly improved on by focusing on new and efficient elements of innovation. The landmark invention of carbon-nanotube computer is such a case of human-computer interaction that has taken the quest for the perfect design to the next level.

Edward Lakatis writes for Idea Design Studio, an invention development company. He is passionate about all things related to invention, and helping other inventor’s realize their products potentials. More of Edward’s writing can be found on Idea Design Studio website. If you have the next great invention idea, Idea Design Studio can be reached for assistance via their website http://ideadesignstudio.com.