What I Learned from Something Lost and Found

Posted on April 28, 2016 by RTS Editor in Inspirational

Last year, I had my study and the adjoining guest bathroom painted. It was a huge job for the painters and us, as we had to remove from my study the contents of 11 large bookcases and then the bookcases themselves. I also emptied the cabinets in the bathroom, as they were being painted, too. The resulting effect was well worth all the time, money, and effort. 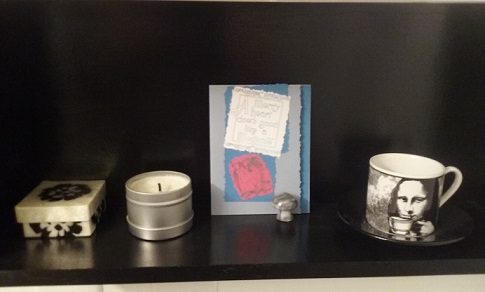 Later, to my great distress, I discovered that my two favorite decorative greeting cards were missing from the bathroom. Now, let me explain where and why I have greeting cards and postcards in a bathroom!

Above the toilet is a cabinet called a Johnny boy. It has two shelves behind doors and an open, lower shelf. On the lower shelf, I have four small decorative items. In addition, I prop a pretty greeting card or postcard up there, changing the cards on no particular schedule. Two of them are perfect for the monthly Spanish conversation group meetings that I host. One of them depicts two smiling Mayan girls in very colorful clothing; one girl is welcoming the other to her home. The other is a lovely handmade card, featuring the words, “A merry heart doeth good like a medicine.”

When I discovered that those two favorite cards were missing, I was horrified. My assumption was that someone—a guest (?), a student (?)—had rummaged through the cabinet, had picked out the two cards, and had slipped them into his or her pocket or purse. I searched everywhere for them, but to no avail.

Worst of all, what was lost besides the cards was my trust in my own students and guests. I was filled with anger and suspicion, fearful that the same thief, or perhaps another, could later take something of more value from my home. There are many little items all over the house, things that could quickly and easily be slipped into a pocket or purse.

I was angry, disappointed, disillusioned, and worried. Gradually, after nothing else disappeared, those feelings faded, but it took a long, sad time for me to stop worrying.

WELL! Recently, I was rummaging through one of many cardboard boxes whose contents I need to investigate and sort. And there, to my immense surprise and happiness, were the two precious cards, along with several others that I like. Obviously, at some point before the painting project, I myself had gathered up the cards and had placed them in that box. Why I had ever separated them from the others that I still had in the bathroom, I have no idea. But now I have them again, and my suspicions have been laid to rest. What a wonderful relief!

Here are the valuable lessons I’ve taken from all this:

Now I can go back to trusting all those who enter my home. May the affection and joy that shine out from the images and words on those two cards fill all of our hearts for a long time to come.

Leonore Dvorkin lives in Denver, Colorado. Besides writing and editing, she tutors Spanish and German, teaches weight training classes, and translates from German to English. She and her husband, David, have one son, Daniel, who wrote two books with his father. Leonore has written three books: Apart from You (a novel), The Glass Family (a one-act fantasy play), and Another Chance at Life: A Breast Cancer Survivor’s Journey (autobiography, also in Spanish). Visit her online at http://www.leonoredvorkin.com/.