Are You Right Or Left Handed?

I have never thought much about whether folks are right or left handed until recently. In my family, there seems to be a condition called Dupuytren’s contracture. It occurs in the palm and extends to certain fingers—especially in my mom’s and my case, it extends from the palm to the ring fingers of both hands. The fingers begin to curve inward from the pulling of the joints in a process extending from the palm upward to the ring finger. 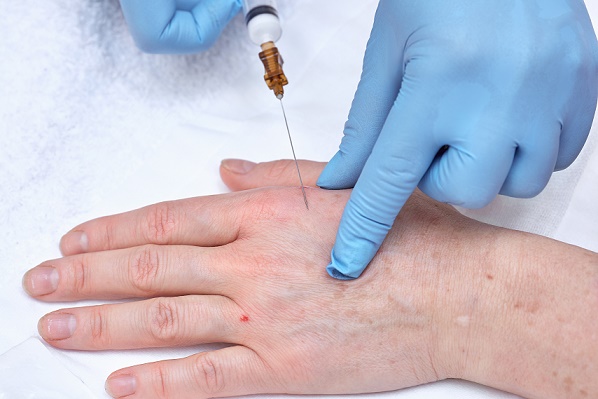 I remember my mom had surgery on both ring fingers of her hands many years ago when she was elderly. As I recall, her fingers were straightened, but somewhat stiff afterward. In the past fifteen years, I noticed a gradual progression of the same condition in the ring finger of my right hand. There was no pain, and I could function well enough, even though my ring finger was stiffening downward into the palm.

I decided to visit an orthopedic doctor in the area whose reputation was excellent and I would ask him about my finger and what could be done. Upon examination, he immediately told me I had Dupuytren’s contracture. He said it occurs in northern European blonde women. My mother’s ancestors migrated to the United States from Germany in the late l800’s, settling in Texas, and they were generally blonde, light-skinned folks. So that analysis seemed to fit my case. I was born “cotton-headed” as the folks in the South would say—white haired that turned more blonde as I matured.

I was surprised that the Dr. could analyze my condition so quickly. Further, he suggested he could straighten my finger with surgery. In more discussion, he said he had done at least 50 such surgeries and “hadn’t lost a patient – or their finger”.

I smiled at his comment, as I was a bit apprehensive about a surgery on my right hand, for the contracture began in the palm, with a raised and hard gristle-like column leading up to the ring finger bringing it downward. He said he wished I had come to him sooner. However, I had no idea he could do this kind of surgery. My intention was to inquire and be sent elsewhere, but there was no need for that now.

He examined my left hand and noticed the ring finger was slanting downward, but he said it had not yet gone into contracture, but we should keep an eye on it—and probably at a later date, do surgery on it as well.

I had mixed feelings about this opinion. I mentioned that the right hand finger had taken about fifteen years to bend into its present condition, and I wasn’t anxious to have the left hand finger worked on yet.

Our attention returned to the right hand finger. He told me the negative aspects—the surgery might not succeed; the finger could be straightened, but stiff; there could be an infection and even amputation.

However, again, he had done over 50 such surgeries and they had been successful.

I agreed to proceed. Necessary paper work was completed, scheduling for surgery was made, with a chest x-ray and a complete physical to be handled by my primary physician.  In a week or so, after various preparations were finished, I went to outpatient surgery in a nearby hospital facility. The difficult part was the insertion of the IV. Since I am “a seriously aged senior”, my veins are not as “perky” as they once were, and after a difficult and almost tearful time, the IV was finally inserted and soon I was off to surgery.

When I awoke I found my entire hand in a cast to the elbow. I was given a prescription for many pain pills and my loving husband took me home for bed rest. As time passed, I found I could tolerate the slight but nagging pain in my hand, and I didn’t need any pain medication. The most difficult part was learning to take care of basic necessities with my left hand. Using my left hand was indeed quite a learning process for me, and a difficult one.

Never having been required to use my left hand, I had to learn to wash up, brush my teeth, and take care of all my physical needs with my left hand.  Working in the kitchen was a learning process as well. The cast was bulky and awkward but I soon took off the “sling apparatus” it fitted in and let it hang loose at my side. That helped a bit.

In a few weeks the cast was removed. The doctor was pleased with the look of my hand and finger. The removal of stitches had to be done – and there were quite a few that a nurse managed to remove for me—but again, the removal of a few stitches caused a tear or two—but finally that process was completed. Soaking my hand in warm water was a big help and bending and stretching the fingers was also helpful and, at last, I could look forward to taking a complete shower. What a happy moment!

As I look back, I am grateful for a successful surgery by a competent surgeon. I can say it was a learning experience and also a humbling experience as the healing process continued. All these years, I had always taken for granted my agility with my hands and fingers. Six weeks of recovery, caused me to recognize what a blessing it is to have the full use of both hands. The doctor was pleased that I could do needlework and he encouraged it as a continuous aid to giving my hand and finger back its agility. And I can again, type quite well with the fingers of both hands.

I agreed to return to the doctor in six months for a review of my left hand. Presently the palm and ring finger are not in contracture so all is well. Perhaps, as in the past the contracture progressed slowly, I will outlive an upcoming surgery in the distant future. (At least, that’s what I’m hoping for, as I write with a slight smile on my face.)