It’s Just a Jump to the Left…

Posted on February 6, 2012 by Ernest in Ken La Salle, Living Your Dreams, Writing

It’s a strange thing pursuing a dream. Sometimes you feel in the zone and you give it your 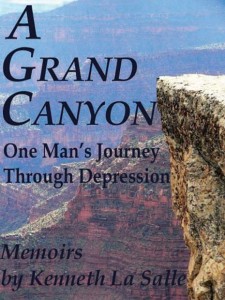 all. Other times, you feel as though you’re floundering and every step is riddled with doubt. Being someone who has chased a dream his entire life, I feel it is my duty to let you know that the rest of the time—probably as much as 80% of the time—you may not know what you’re doing at all!

There’s no certainty. No path. It’s entirely up to you. This is something I’ve had to explain to my mom when we’ve had conversations about my writing career. As a woman who had a traditional career working in manufacturing, I can always see her dying to ask, “So, are you crazy?”

Such is the life of a dreamer. We’re… well, kinda crazy. Did you know that Harold Lloyd, one of the kings of comedy in silent film, put his entire future on the flip of a coin? (Fortunately for fans such as myself, it landed as it did.) Popular legend tells us the Wright Brothers, inventors of human flight, did so only after running a bicycle shop. Walt Disney was thrown out of his pursuit of a journalistic career by an editor who told Disney he “lacked imagination and had no good ideas.”

All you know is your calling. Maybe you’re lucky and you can put a name on it—invention or art or what have you—or maybe you don’t even know what it is; you just know in your gut there’s something you have to do.

That’s how it was with me. As a young man, my dream was to be an actor. I was fortunate enough to live that out on stages and even in film. At the same time, I also wanted to write… and sing… and direct… The only thing I was sure of was that I wanted to create and words were the medium through which I knew I’d excel.

After decades of meandering about, I ended my thirties with a solid focus on writing novels —and I’ve written a few. Then, I found an opportunity (and a talent) for writing plays. Then, I found some interest in my articles.

It’s not about being single-minded. Following a dream is about being what you need to be to follow that dream. And so it was a few years ago that I found myself inspired to answer the question: “What is success?” I’d studied Philosophy as Cal State Fullerton and had read more than my share to know a good question when I heard it. I spent several months pursuing the answer and even more months writing it down. It ended up in a book I called Climbing Maya, a reference to the illusory nature of my search.

When I was done, I had written a philosophical memoir I could be proud of that I knew had actually added something to the world. My dream with all of its back roads and detours had taken me to a place where I’d actually done something no one else had ever done!

I had told Vicky from the beginning that I was sure it would never sell but after you write a book, what else is there to do but try to sell it? So, I did. Several hundred rejections later, having resigned my book to self-publication (which I have done with several of my novels), I found an agent whose belief in me and my book was so strong… it was an inspiration in itself! Was it possible that my words had such a positive effect on one person and could that happen with others?

Well, as it turns out, it could. And it did. And I’m happy to tell you that Climbing Maya will be published by Solstice Publishing!

Dreams rarely take you in a straight line. It’s what makes them fun!

You can find more news on Climbing Maya here and on my writing blog at http://kenlasalle.blogspot.com/. Next month, I’ll take you on another sideways turn with Climbing Maya with… a step to the right… Listen to  a podcast that features a discussion of Climbing Maya,

Novelist and Playwright, Ken La Salle grew up in Santa Ana, California and has remained in the surrounding area his entire life. He was raised with strong, blue-collar roots, which have given him a progressive and environmentalist view. As a result, you’ll find many of his stories touching those areas both geographically and philosophically. He’s also very funny. His plays are often seen in theaters on the west coast of the U.S. and many of his books can be found in ebook format on Amazon.com (for the Kindle) and Smashwords.com(for all e-reader formats). Ken La Salle is represented by Sullivan Maxx Literary Agency.