Facing Forward and Accepting What Is 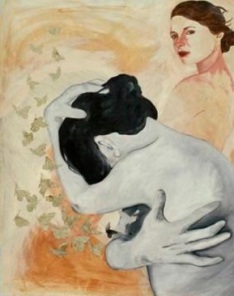 One of the consequences of having infertility and loss is my romanticizing motherhood. In 2003, my daughter died of SIDS; I had an ectopic pregnancy in 2004 and have struggled with secondary infertility ever since. The most joy I have had in life was during the month my daughter was alive. Because my joy was interrupted, I never got to feel any of the inevitable losses mothers go through. I never had to feel the loss of identity mothers often feel, never had to feel sad that my daughter was no longer my baby. Every month since that I haven’t been pregnant has made me feel like I would never feel joy again. I didn’t  realize that my joy would have been interrupted in other ways during mothering; that joy wasn’t what mothers only feel.

I became aware of a more realistic notion of motherhood through editing and publishing Joy, Interrupted: An Anthology on Motherhood and Loss. Many of the contributors wrote about the death of their child and infertility. But many others wrote about other forms of loss, whether through adoption, estrangement, individuation, and more. My view of loss was myopic before I read these pieces. I saw loss only in the context of not having a child; it has never occurred to me that loss was also part of mothering throughout a child’s life.

Thus, an important part of healing from my losses has been accepting what is, rather than being stuck in my longing. My life is no longer defined by nostalgia. I am learning to find joy in other ways, such as in step-mothering, getting a PhD, my relationship with my husband, and editing the anthology. I know it sounds clichéd to say that happiness means appreciating what you have rather than what you don’t have; but this has been a hard lesson for me to learn. My grief has been reset every month that the pregnancy stick has been negative, and I have continuously been catapulted into desperate longing.

Now, my longings have lessened. I still hope every month, but every month my cycle ends in blood, I know longer feel fatally wounded. My heart still aches when I think about my daughter, but I am also appreciative of the joy I felt when she was alive. I am learning to feel joy again.  Rather than obsessing over what isn’t, I am getting better at accepting what is.

Bereavement means defining yourself in a way that isn’t dependent on your loss. I am no longer just the mother whose child died, no longer just infertile. My life isn’t stuck in the negative.  Healing for me means seeing life as it is, not just what I want it to be.

Facing forward is hard for me. As a writer, the past has been important to me. Dwelling on my past has helped me make sense of now. But, I realize that I can get stuck in the past. One of the hardest parts of my early grieving was flashbacks of my daughter’s death. The puff of blood coming out of her nose, her body limp in my arms, the ambulance ride to the hospital, the moments waiting alone in a stark room at the hospital to see if she was alive or not; the haze of the funeral. My heart felt broken whenever a flash went through my mind.

Now I know that I was probably dealing with PTSD. I couldn’t help seeing these images over and over, getting stuck in the moment of the tragedy. Also, I realize that going over and over the moment of her death I kept wishing for it to be different. I wanted my prayers now to rewind time and make it be different. Being in the past meant time travelling and hoping to bend time to my will.

And infertility has also been a way of being stuck in what isn’t. Wanting to get pregnant every month meant being keenly aware of the disappointments I had already felt month after month. I braced myself, feeling like nothing would change, and I would be disappointed again. My pain now was determined by my pain then.

My current place in my grief journey is to look ahead and not feel trapped in what has been. I have hopes that aren’t dependent on replacing my past losses. I can imagine living with dampening pain, the heartache less intense, and moving toward joy once more. Accepting what is while wanting more is a delicate balance. It is my challenge, but I am facing forward once more.

Dr. Melissa Miles McCarter lives in a small community of Arcadia Valley in Southeast Missouri, with her husband, Dr. William Matthew McCarter, step-son Britin, and pets (including their English bulldogs, Boss Hog and Daisy). In addition to being an author, Melissa is the publisher of a small press, Fat Daddy’s Farm. As an editor and publisher, Melissa’s goal is to help uncommon voices grow and flourish.