‘Summers at the Lake’ with Jon Stott

Posted on April 28, 2022 by Ernest in Author Interviews 0 Comments

Professor Jon Stott’s new book Summers at the Lake: Upper Michigan Moments and Memories was published this month by the Modern History Press.

“In these autobiographical personal essays, Stott puts in words many golden memories of his lakeside life in Michigan’s Upper Peninsula and those of his childhood days on Canada’s west coast.” – NewsBlaze

Jon Stott told RTS about the inspiration behind Summers at the Lake and what the book represents in and beyond its literary offering. His answers are summarized below. 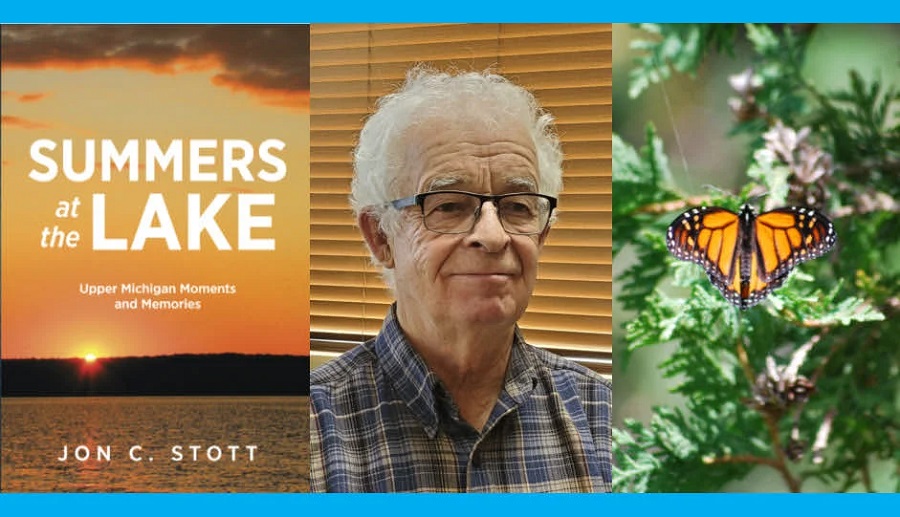 What particular lake or lakes inspired these essays?

Shawnigan Lake, on the west coast of Canada, where I spent my childhood and early teen summers. The book includes a few of the essays my father, Art Stott, a newspaper man, wrote about these years (1940 – 1955). And Crooked Lake, a small lake in Michigan’s Upper Peninsula, where I have spent extended summers since 1985.

Are all memories in the book from summer time? What is the aesthetic value of the same lakes in winter?

All summer – the west coast lake was only visited one December afternoon to harvest a Christmas tree. Crooked Lake is inaccessible nearly six months of the year and all the summer cottages are usually closed up from mid-late October to around Memorial Day.

Does the book show that the time spent by the lakeside has therapeutic value – like medicine for the soul?

Definitely – essays are meditations about the joys of simple lakeside events and encounters with the world of nature.

To an intended tourist/traveler who has not been to this part of the country, how does the book serve as an invitation to come and see the beauty of the area?

There are essays about six noteworthy natural and historical sites. Campers may be encouraged to stay at the many campgrounds situated beside small lakes in the UP and to experience such moments in nature as the author describes.

How long did the book take to complete?

Earlier forms of many of the essays were written between 2015 and 2021. The revising of these, the writing of new essays, and the compilation of the book took place between April and September 2021.

Jon Stott, Professor Emeritus of English, University of Alberta, has spent most of his summers beside lakes – in the mid 20th century on the west coast of Canada and for the last four decades in Michigan’s Upper Peninsula. Since retiring, he has written books of general interest on such subjects as minor league professional hockey and baseball and the craft beer movement. His Paul Bunyan in Michigan (2014) is a retelling of the legends of the hero-logger of the later 19th century and is set in the Upper Peninsula. He is currently working on Yooper Ale Trails a celebration of and guide to the craft breweries and brewpubs of Michigan’s Upper Peninsula.

For more entertaining and empowering titles like Jon Stott’s Summers at the Lake, visit www.ModernHistoryPress.com.