Posted on August 27, 2021 by Ernest in Author Interviews 1 Comment

Hot off the Loving Healing Press is the new gem of a survival and recovery book Left / Write // Hook by Donna Lyon. The book is a collection of stories by eight victims of abuse, who found their way back to recovery via a unique project combining a regimen of boxing with writing. The following is a basic author chat with project supervisor and academic Donna Lyon, who edited Left/Write/Hook. The Q&A has been edited to fit the format of this publication. 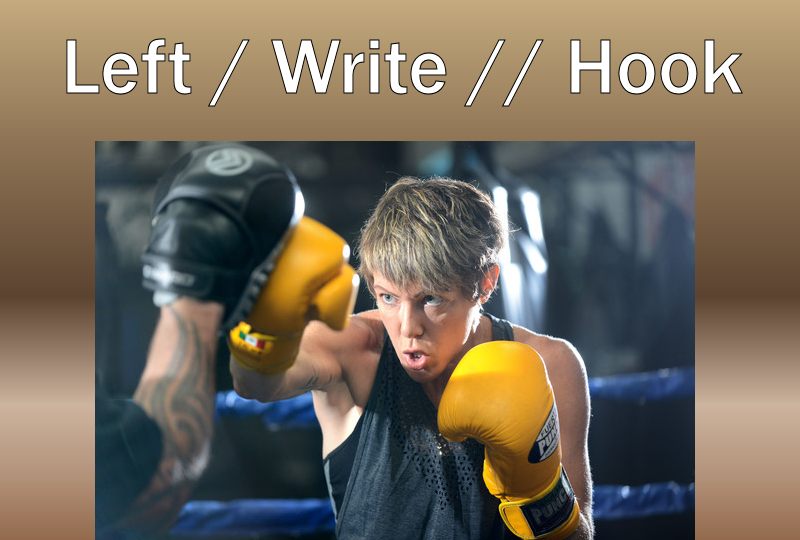 How many authors are included in the book and of what age and nationalities?

There are 8 writers who have contributed to this book. All identify as female or gender diverse. We are a group of white Australian survivors. The youngest in our group is 28 and oldest 55.

Are all the authors included in the book victims of childhood or adolescent sexual abuse?

Our abuse ranges from incest, attacks from people in our social circles, to assaults by complete strangers, through to organizational, institutional and ritual abuse. All our abuses started in childhood.

How did this project start? Who conceived the idea and who funded it, etc?

Left/Write//Hook is founded and led by boxer, academic, researcher, producer and survivor Donna Lyon. She started the project independently in 2019 and ran the project twice at her local boxing gym. Then in 2020, she took the project into the research space at University of Melbourne, Australia, where she worked as a lecturer in Film and Television. The project was funded through a grant from the Creativity and Wellbeing Research Institute, as part of the Faculty of Fine Arts and Music within University of Melbourne.

This iteration of Left/Write//Hook brought together an interdisciplinary research team and mixed methods research design to explore the impact on the program on the participants’ well-being and sense of agency. This included a documentary filmmaker who filmed the program with the intent of producing a long form documentary film. Donna leads the writing and boxing, as she is a level one boxing coach.

In what two ways was this a difficult project?

First, at the end of week two of Round One, Covid-19 hit, so we pivoted online. Melbourne, Australia experienced one of the longest and toughest lockdowns in the world. We spent approximately seven months in domestic and online environments and ran the project on zoom. Initially, the project was only meant to run for one round (eight weeks), but because of lockdown Donna ended up running the project for three rounds. This meant the group went on a significant emotional, mental and physical journey together to produce this book!

Another difficulty was the emotional complexity of the project. Talking about sexual abuse is difficult and there is a heaviness with this work. There was lots of shame and fear and anxiety that many of us had to battle through each week. The framework that Donna had created was rigorous and did provide a sense of safety and emotional well-being to help hold the feelings that arose each week. At times, participants felt exhausted dealing with the effects of their abuse in the workshop each week. It was certainly a commitment.

Did any of the participant authors know each other before becoming part of the project or were they all introduced to each other via this project?

Three of the participant authors had completed Left/Write//Hook in 2019 and jumped at the opportunity to participate in the research, which included producing a book of writings. We are also now working together on a documentary.

Did the participant authors become friends by participating in the project?

As a group we became very close. Sharing such intimate thoughts, feelings and beliefs each week meant that bonds were formed very quickly. We are in contact on group messenger chat all the time and provide words of encouragement to continue to support each other’s recovery.

What are two important lessons the supervisor of the project learnt from this project?

One, I have learnt that adult survivors of childhood sexual abuse are incredibly strong, resilient and intelligent. What they think of themselves is often so different to who they really are.

Second, I have learnt that the violence can be taken out of boxing and it can be incredibly empowering and therapeutic and that combining the mental with the physical is so important to release trauma.

For updates and to learn more about Left / Write // Hook, readers can visit www.leftwritehook.com.