A Different Kind of Hobby

This column comes from a man who is a reader of a column I write for THE BLIND POST, David Feucheux from Louisiana. I must confess that I’d never heard of David’s hobby, and pounced on him immediately for an interview.

David, a graduate of the Louisiana school for the blind, says that he has always wanted a hobby, but somehow couldn’t seem to settle on one until he discovered kumihimo. 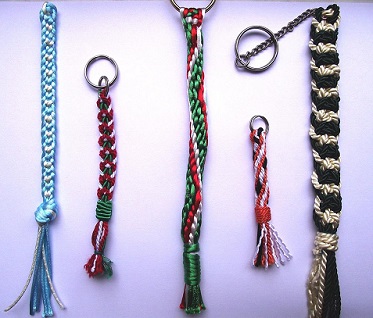 Here is a description of it in David’s own words.

“Kumihimo is a type of braiding. It is done on a loom-type device. Imagine an octagon. Each of the 8 sides has 4 narrow slits. The octagon is made of the same material as  flip-flops. You arrange seven or eight strands in various slits. Each of the slits is numbered from 1 to 32. You cross certain strands over other strands in a certain pattern. You then turn the loom and do again. It’s rather hypnotic.”

David goes on to say:

“Here is a bit of background from a book I consulted. Taken from the book Kumihimo Wire Jewelry by Giovanna Imperia

“Braids are common in many cultures, where they have served a wide range of functions–from practical applications to decorations on garments to key elements in religious ceremonies. Some braiding traditions developed independently in different regions, which led to the emergence of unique designs and structures. Some braiding traditions developed as a result of cultural migration. A good example of the latter is the development of kumihimo in Japan.

A Brief History Of Kumihimo

“The term kumihimo means intersected threads. It refers to any type of braid executed using the loop-manipulation method (which does not require equipment) or any number of stands.

Kumihimo has a very long history in Japan, where some early examples of impressions of braided structures on pottery date back to the Jomon period (8000-300 BC). By the Kofun period (4th-6th centuries), braids had become common thanks in large part to the diffusion of Buddhism. According to research by Masako Kinoshita, many of the early braids, such as the ones in the Shosoin treasure house (Nara period, AD 645-784), were probably executed using the loop-manipulation braiding technique.

Over the centuries, kumihimo became an integral part of the Japanese culture, where it assumed uses that ranged from the functional (such as ties for prayer scrolls or as lacing devices for the samurai armor, which required nearly three hundred silk braids) to the decorative (such as embellishments for Buddhist statues and rosaries as well as obijime, a narrow braided belt that holds the much wider obi in place). Because of its role in Japanese culture, over time, many different pieces of equipment were developed, which helped artisans produce braids faster and of consistent quality while developing new and more complex structures and designs.

Automated machines, developed later in the Meiji period (1867-1912), allowed for even faster production. These machines are still in use today, as are five braiding stands: the Maru Dai, Taka Dai, Karakumi Dai, Kaku Dai, and Ayatake Dai.”

David says he first heard of kumihimo in 2010. When a short course was offered in January of 2014, he took it.

Although he had actually only been pursuing his hobby for about three months at the time of the interview in April, he was enjoying it a lot. He says that one good thing about kumihimo is that he is able to figure out a lot of it for himself, making progress easier, and to me, more challenging.

He uses various types of cord in his projects, although some people use wire. David says that so far that is beyond him, but something tells me that will be in his future. When I asked about his hobby goals he said:

I’d like to learn several other braiding styles. I also want to learn to attach clasps to bracelets and other projects. I’d also like to learn to use the rectangle loom. I am told it is used to make belts. “I am about to make a bracelet using particular kind of Japanese beads called magatama beads.

When I asked David if he had any other special interests he said:

My secret dream is to have several works published. I am not good at writing. I wanted to write one about my time at a blind school before this entire culture is forgotten by a younger, hipper, more fortunate, perhaps less appreciative, generation of blind who have no idea what it was like to go far away from home at a young age and meet nice and not-so-nice teachers, house parents, and fellow students. I want to write two nonfiction works, one is a diary, it’s in process, as I got the idea from Kathy Schneider, and the other about an ancestor who came here from the Canary Islands in 1779 at age 10. The latter would be a long epic historic fiction novel, Inca, in the style of Gary Jennings’s Aztec, but it’s not likely. If I can get the diary and the blind fiction I’ll be pleased. I don’t describe myself as a writer. I do not enjoy it, and I do not feel like I have to write. It’s a means to an end. Characters do not pour through my head either. It’s work.

Trust us, David, all who write find it work if they’re honest, at least with themselves. (This last remark from Phyllis)

Phyllis Staton Campbell, born blind, writes about the world she knows best. She says that she lives the lives of her characters: lives of sorrow and joy; triumph and failure; hope and despair. That she and her characters sometimes see the world in a different way, adds depth to the story. She sees color in the warmth of the sun on her face, the smell of rain, the call of a cardinal, and God, in a rainbow of love and grace.

Though born in Amherst County, Virginia, she has lived most of her life in Staunton, Virginia, where she now lives not far from the home she shared with her husband, Chuck, who waits beyond that door called death. Visit http://www.amazon.com/author/psc-books-all for her books.

2 thoughts on “A Different Kind of Hobby”