Posted on August 19, 2013 by Ernest in Addiction, Inspirational

The lives of celebrities remain under the microscope for all the world to see. Along with recognition, the continuous 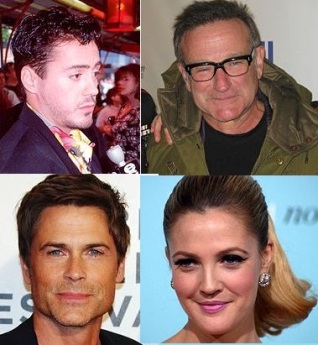 invasion of privacy also commonly illustrates downfalls. These downfalls may represent addictions. While many stars encountered the problem, some made it to the other side.

Though many remember Lowe’s wild boy days that included a much publicized sex tape scandal, the handsome celebrity also admittedly suffered from alcohol addiction. After meeting and falling in love with his future wife Sheryl during 1990, the young star decided it was time to clean up his act and entered the Sierra Tucson Center in Arizona. His success at battling his addiction put Lowe in the position of helping another famous celebrity, Robert Downey Jr.

From her rise to stardom as the precious tot in ET, Ms. Barrymore quickly fell into the darker side of Hollywood by drinking and smoking by the age of nine. One year later, she advanced to marijuana and cocaine. She entered the ASAP Family Treatment Center in Van Nuys at the age of 14 after an attempted suicide. Following release from the facility, she suffered a relapse and once again entered ASAP for another three months. Though sober for many years, now married and a new mother, the popular star reportedly claimed that while many believe that her story has a happy ending, she advises that staying sober is a daily battle.

Legendary stand-up comedian and film star Robin Williams suffered alcohol and cocaine addictions early in his career. He voluntarily entered rehabilitation similar to the alcohol detox facility in Utah. The drug-related death of close friend and fellow comedian John Belushi helped convince the up-and-coming star to stay on the straight and sober road. He continues entertaining audiences with his manic style of humor and has a career that spans decades.

With a father all too familiar with show business and the evils thereof, the Iron Man star was introduced to marijuana at the tender age of six. Continued experimentation transformed into addiction to cocaine, heroin, and other substances. His addiction led to arrests for drug charges during the latter part of the 1990s. Though friends Larry Hagman and Sean Penn tried to convince the young star that he needed rehabilitation, he only entered a facility following a court order and state imprisonment in 1999. He was once again incarcerated in 2001. The actor has been sober since 2003 and gives credit to his first wife. He also believes that yoga, meditation and martial arts help him remain sober.

Jayla Barnsen is a freelance blogger from Eugene, Oregon. She writes on a variety of topics, including health, saving money, and the great outdoors.