The following blog post is excerpted from a story appearing in Recovering The Self: A Journal of Hope and Healing, Vol. IV, No. 1 (January 2012).

Lying is pervasive. There are many forms of lies—little white lies, fibs, tall tales, and bold-faced lies. Some lies are told to spare feelings; others because it is a game of cunning. And sometimes lies come in the form of not saying anything at all—avoiding. In the end, they are all the same. They are all deceitful; they are all dishonest; they all hurt.

He told lies because he could. It was a sport—a game he played; an art form he’d perfected—without regard for the other person,  He could look you squarely in the eye without blinking and weave stories that could twist you first this way and then that, because you’d want to believe; but deep down, you’d know.  And when you knew and questioned him further, he’d become violent—a scare tactic he used to avoid the truth. When you were afraid and backed down, he won.  He always won.

Countless times, the telephone would ring, but no one was ever there when she answered. He, of course, had no idea who it was. When she changed to unlisted, the hang-up calls persisted.

“The only people who now have our number are those we have given it to. Who did you give our number to who would hang up when I answer?”

“Me? You’re crazy. Where do you get these crazy ideas? Do you lay awake at night to dream up this stuff?”

His eyes bulged; the veins in his neck exposed the beating of his heart. His nostrils flared like a bull ready to charge. Towering over her snorting and ranting, the rampage continued.  Backing herself into a corner, she wondered if there’d be another hole in the wall made by the back of her head she’d have to cover with a picture. Instead, he displayed his power by thrashing around the house, slamming doors and objects before going off to his “den” like a bear in a cave during hibernation—coming out only to eat, and then acting as if nothing happened.

When you believed his lies, he’d call her gullible without admitting he’d lied. He resented her for being gullible—it was weakness to him. It was not gullibility—it was self-defense. Acting gullible stopped the wars and the violence—for another day.  He had just told another of his concocted stories after being asked where he had been. He’d always said, “Know the answers to the questions you ask.” This time she did. She called where he said he’d be, but wasn’t; she confronted him. He did his usual accusatory dance. She tried something new—not getting caught up in his drama and not allowing him to put her on the defensive. He stood silent. Busying herself, she kept him in her peripheral vision in case she’d have to duck and cover.   Finally, he couldn’t take it anymore, “Well, do you believe me?”

“Of course, you’re my husband. You wouldn’t lie to me,” she smiled.

He seemed lost; he stared at her for a moment, then turned and walked away, retreating to his cave, probably to ponder what had just happened, and how he’d lost control. It always made her wonder how a person, who professed to love her so much, could be so deceitful and so filled with contempt. Could he not see the pain his lies caused or the devastation swirling around him? Could he not see the hopelessness and despair? Did he not care?

More than 25 years they were together—since high school. She never told anyone the hell she was living. She covered for him, hiding her bruises, making excuses for the missed appointments and cancelled social engagements. In public, he was always self-controlled; always showed her the utmost attention; always a gentleman. Who would believe her?

He didn’t realize he was building walls instead of bridges. In the end, he’d built himself a house without doors. He couldn’t escape, but she was set free—free from the master deceiver, and free from his clutches. Free because she was on the outside of the house with no doors. 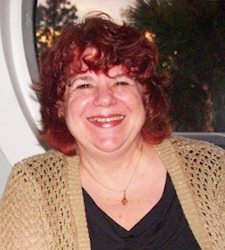 Linda Silfies is an avid writer and blogger. She has a Paralegal Associate Degree, and is a former licensed massage therapist for the Olympic Games. She earned certification as a District Justice and currently is working toward her Bachelor of Arts degree in writing and linguistics. She was raised in Easton, Pennsylvania, and currently resides in Jacksonville, Florida.