‘A Light Shines in the Dark: Exposing Modern Slavery’ – Sweta Srivastava Vikram’s Poetry Focuses on Abuse and Trafficking of Women

The Wedgwood Quartet and The Saint Cecilia Group teamed up to present, “A Light Shines in the Dark: Exposing 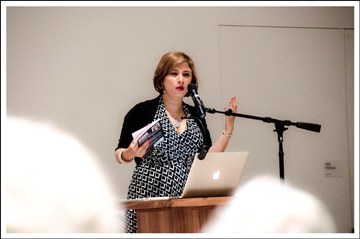 Modern Slavery,” a concert to raise awareness of human trafficking in the 21st Century on Saturday, August 10th, at 8pm at the First Congregational United Church of Christ in Washington DC. It was an evening of music, poetry, photographs and plain talk.

Slavery is not an evil confined to the annals of history. It is a horrific reality experienced by men, women, and children—today, here in this country, here in this city, in neighborhoods just blocks from the White House. They are victims of sex trafficking, abusive domestic servitude, debt bondage, and migrant and child labor trafficking.

This benefit concert was designed to shed light on a very modern evil and let survivors know that they are not alone. The belief: together, we can end human trafficking, and restore beauty to lives touched by ugliness.

Sweta Srivastava Vikram, a MHP author, read three poems at this event from her books, Beyond the Scent of Sorrow and No Ocean Here. Her poem, “Brothel,” from No Ocean Here exposes the problem of sex trafficking of Nepalese girls into India. Most of these girls are lured by the promise of employment or marriage.

In her poem “Smell of Burnt Curry and Skin”, also from No Ocean Here, Sweta focuses on women in Bangladesh who have become victims of acid throwing attacks because they couldn’t procure the amount of dowry their husbands and in-laws desired and refused to be trafficked to the Middle East. In “Unholy men”, a poem from her poetry collection, Beyond the Scent of Sorrow, Sweta addresses the problem of sex trafficking using eco-feminism where she compares the landscape and stories of nature in southwestern region of Portugal & draws a parallel between situations of women worldwide.